Testimonials
17th September 2021
MF IDEAL combine performing well in Lincolnshire
A Massey Ferguson Ideal 8T combine, selected following on-farm demonstrations of the new model plus several competitors, achieved all that was expected of it and more during its first harvest on a North Lincolnshire farm.

Mark Trotter farms approximately 690ha of arable crops in the Lincolnshire Wolds in partnership with his father Don and brother Stuart. Trading as DWB Trotter & Sons, the family has farmed at Kelstern since 1962. Half of the cropped area is owned or farmed on tenancy agreements while the other half is contract-farmed. The land is in three main blocks up to 10 miles apart and soils range from Chalky Wold to a Clay Loam.

For the Trotter’s own crops, the rotation includes wheat, spring barley and spring beans. Oilseed rape is no longer guaranteed a place in the cropping, and vining peas are grown occasionally instead of beans. Wheat, barley and beans are grown for seed, so producing clean, top quality crops is a priority, and the ability to harvest them in peak condition is essential.

“We have to have the harvesting capacity to get crops in the shed,” explained Mark. “When choosing combines our main requirements are minimum grain damage, low losses and high work rates. We have modern grain storage, but when seed is our target market we have to dry slowly and cautiously. This means making the most of opportunities to harvest when the crop is in optimum condition and moisture levels are low.”

The farm is only 10 miles from the coast and sea mists are common, forcing harvesting to start later in the day than on farms further inland. “On paper, there are plenty of combines capable of achieving the work rates we need, but in the real world our opportunities to harvest are more limited and we have to allow for variable crops and conditions,” Mark stressed.

Combines are usually updated every five to six years. During the 2019 harvest, several brands were trialled including the new Massey Ferguson Ideal 8T, which was demonstrated by local main dealer Peacock & Binnington Ltd. Mark was impressed by the simple design and excellent performance, and ordered an Ideal 8T with a 10.7m SuperFlow header for the 2020 harvest.

Minimising compaction and soil damage is considered important, so the new combine was ordered with TrakRide rubber tracks. “We had tracks in the past, but 900-series tyres were a new option when we ordered our previous combine, so we specified those instead,” explained Mark. “However, it was wider and more difficult to move around by road which was one of the reasons we were keen to return to tracks. The Ideal is extremely narrow, and even with 30-inch tracks it remains under 3.5m, whereas we couldn’t fit tracks wider than 24 inches on other combines we considered. Another factor was that we were upgrading from a 9.2m conventional header to a 10.7m SuperFlow, and we felt that wider tracks would distribute the extra weight more effectively. Also, riding on tracks rather than wheels would provide a more stable platform for the bigger header.”

The latest Michelin CerexBib 2 rear tyres, capable of operating at only 20psi were an option, and these were specified too.

Mark said that having used the SuperFlow header for a full harvest, he definitely wouldn’t want to use a conventional type again. “In standing wheat a conventional header is fine, but in crops such as oilseed rape or laid barley the SuperFlow’s advantages are obvious. The crop flow is always even which maintains a constant threshing and separating load so it’s easier to make the most of the combine’s capacity.

“It was excellent in oilseed rape too. Conditions were hot and dry and the crop was prone to shelling, but because the header handled the tall crop so well without needing to use the reel we lifted it clear to avoid contact. This meant there was no risk of shaking the seeds out ahead of the table.”

Mark commented that harvesting brackled spring barley and laid oats for a local farmer was also easier. “Being able to tilt the header forward to optimise the knife angle was a help, and both crops were handled easily although they would have been a challenge for the previous machine. Achieving a smooth crop flow improves results and increases productivity.”

The Ideal 8T’s operating efficiency means that less power is needed than for competitor models of similar capacity. “At 538hp, it’s 50hp less than our previous combine but operates with a wider header and achieves higher work rates,” commented Mark. “Even while working on slopes with the unloading auger running we were never short of power.” Fuel consumption while harvesting averaged 55–60 litres per hour; much less than the farm’s previous combine, and the tank capacity was sufficient for at least two full days’ work.

The Ideal 8T achieved a very good grain sample which met the standards required for premium prices. “Last year was my 45th harvest operating a combine, and I found the Ideal easy to set up and there was never a problem obtaining a good grain sample while optimising the work rate,” said Mark. “The operator just selects the crop type on the terminal and the settings are applied automatically. It was never far off, but I used my experience and judgement to fine-tune everything through the touch-screen to achieve the results I wanted.”

Mark was impressed by Massey Ferguson’s HarvestPlus feature. “Previous combine ‘cruise control’ systems reacted too slowly to be useful, but HarvestPlus is different. I can set it to achieve a maximum working load, and as soon as there is a change in crop density it adjusts the travel speed accordingly. It helps maximise work rates and reduces operator fatigue.”

IDEALharvest performance optimisation is available for all Ideal combines. Using information from acoustic sensors, it identifies spare capacity in the threshing, separation and cleaning systems. Performance is optimised in line with objectives specified by the operator, while keeping grain losses within pre-set levels.

“It wasn’t available when we ordered our combine, but I believe it could offer us benefits,” suggested Mark. “I’m always keen to invest in automation and new technology, and would be keen to try it.”

Mark liked the Vision cab and complimented the all-around excellent visibility. He said the combine’s narrow width made moving between fields easier and safer, and allowed it to remain on one side of the road without straddling the centre line. The view of the unloading auger and trailers was very good, and he found it easy to keep an eye on the knife which is further forward than on conventional belt-less headers. 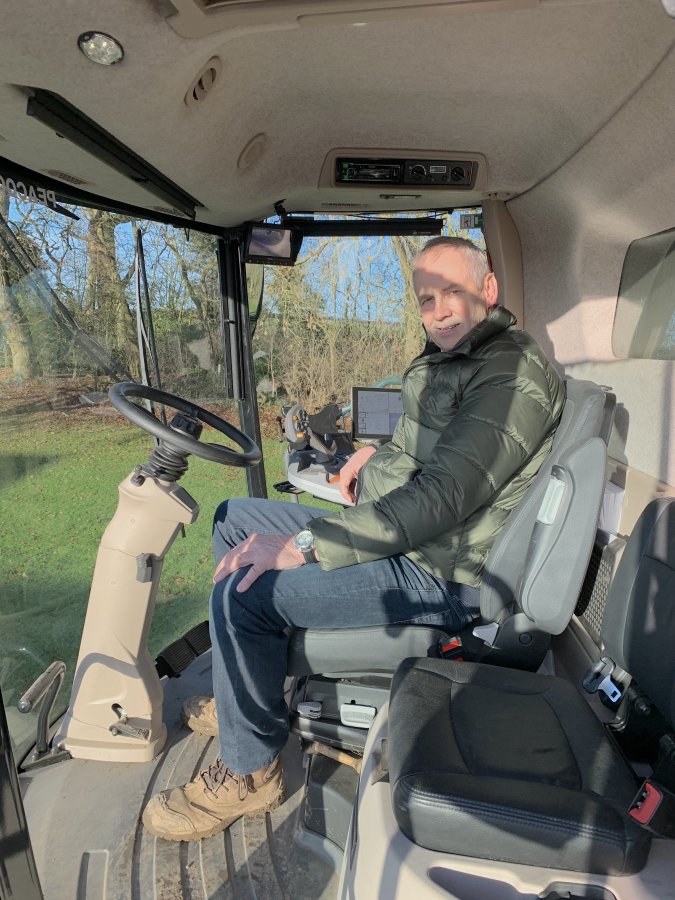 “Having completed our first harvest with the Ideal 8T, I am very happy with our decision to buy it, and it matched or exceeded all our expectations,” Mark confirmed. “We had just a few teething issues which we had expected, and one breakdown caused by a child’s scooter which passed right through the combine having been dumped in a field, but in each case the Peacock & Binnington team looked after us well and downtime was minimal.

“We don’t use Massey Ferguson tractors currently but our positive experience of the Ideal so far as well as faith in our local main dealer means the brand will definitely be considered in future.”