Celebrating Generational Farmers and Their Equipment

As we wrap up our 175th anniversary, it’s important to recognize the generations of farmers who have inspired us to continue pushing forward with reliable, easy-to-operate agricultural equipment. The farmer has always been at the heart of what we do. From our founders to today’s engineers, product specialists and support staff, our mission has been to solve North America’s — and the world’s — ag challenges with straightforward, dependable, accessible machines.

During the recent Farm Progress Show in Boone, Iowa, we were excited to not only celebrate with farmers, but to bring together vintage tractors from across our brand history to tell the story of Massey Ferguson. Each machine was a testament not just to the quality and durability of Massey Ferguson equipment, but to the strong bond between our company and the farmer in the field. Many of these tractors have been in the collector’s family for decades and been lovingly cared for by generations of farmers.

Sharing agriculture’s biggest stage with these iconic machines was an honor and a privilege. Standing side by side with our latest tractors — the award-winning Massey Ferguson S Series — it was clear that our equipment has always been “Born to Farm.”

In 1938, Larry Elsasser’s grandmother bought a Massey-Harris Challenger for her son. The machine remained in their family for generations and eventually Larry inherited the farm and the Challenger, which he has restored to show condition. Currently, Larry and his wife, Bonita, are building a museum to house the Challenger and the rest of their collection of antique tractors. 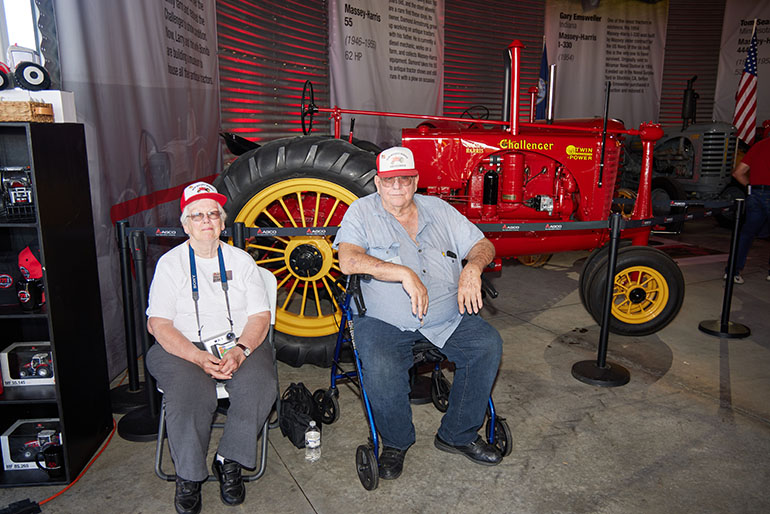 Larry and Bonita Elsasser with their vintage Massey-Harris Challenger.

This Massey-Harris 55 was built in 1947 during the company’s centennial anniversary. Though common in those days, the original steel wheels are a rarity even in antique tractor circles. Damond Armstrong, the owner, is an avid collector of Massey-Harris machines as well as a farmer. This 55 still sees work with a plow on occasion. 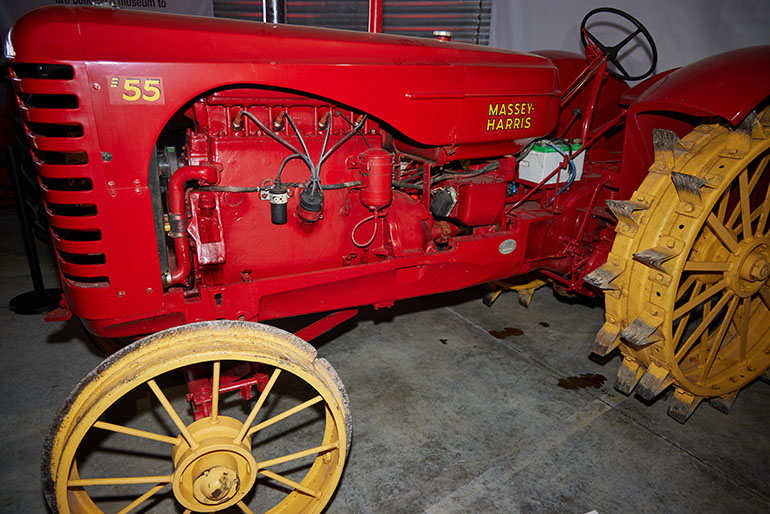 Built in 1954, this Ferguson TO-30 spent decades working Ethel Stuck’s 110-acre farm. She retired the tractor in 1982, and it was restored in 2008. Ethel passed the tractor to Alexander Stuck, who has a passion for preserving Ferguson heritage, in 2016. 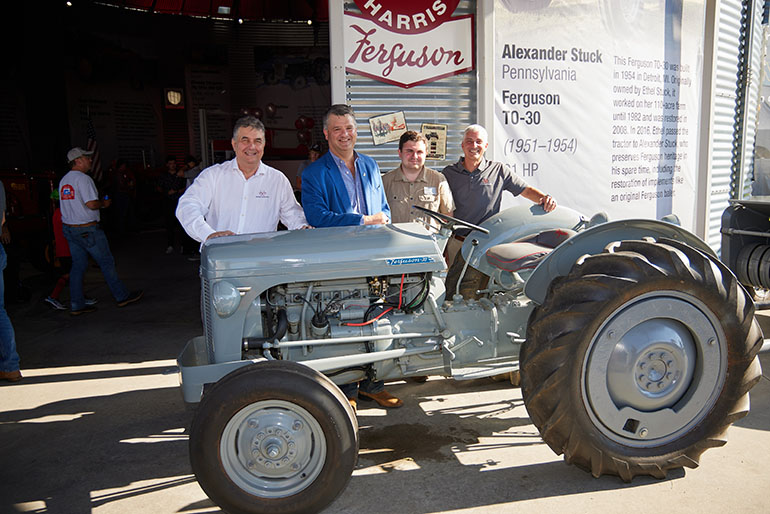 The Massey-Harris I-330 is one of the rarest tractors in existence. It was built by Massey-Harris under contract to the U.S. Navy. Six were built and only one survived. The I-330 was sent to Miramar Naval Air Station in 1954 and later ended up in the Naval Surplus Yard in Stockton, California. Gary Emsweller purchased and restored this truly one-of-a-kind tractor.

A true workhorse, this Ferguson TO-35 is still in use today. Owner Gary Heffner uses the TO-35 to rake about 50 acres at his commercial hay operation. A dedicated Massey Ferguson farmer, Gary is the founder of Legacy Quarterly, the only brand-centric publication in North America.

The Massey-Harris 444 represents a unique time in the brand’s history. It was one of the last tractors built before the company officially became Massey Ferguson. The tractor features a single front wheel, propane fuel and a full 3-point hitch. For owner Tom Seaberg, the 444 is a stand-out in the collection started by his grandpa, who worked at a Massey dealership in the 1960s. The Seaberg family has owned Massey and Ferguson tractors since the 1930s.

David Batliner is a generational Massey Ferguson family member. David’s father, Joe Batliner Sr., was a farmer and ran the local Massey Ferguson dealership. He collected two Ferguson 40s during this time. Through the years, this machine has been used for light-duty work around the family farm. The unique cream color stands out from the traditional red and gray Massey Ferguson livery.

Also belonging to David Batliner, this Super 90 spent many hours discing the ground with David’s grandpa at the wheel. It was one of the first tractors they used to farm row crops.

Originally built in England, this tractor is believed to be one of the only high crop 165 versions in existence. David L. Helman, a Massey Ferguson dealer from 1968-1981, found it in Ohio in 2005. He was proud to display this rare example of Massey innovation with his son, Aaron. David passed away in 2020, and Aaron submitted the tractor as tribute to his father.

David Batliner grew up with Massey Ferguson equipment in the field and at his father’s dealership. This 1968 MF 135 was the first tractor David helped restore when he was just 14. He and his brother Joe recently restored it again as an 80th birthday present for their father, Joe Sr.

Over the years, Massey Ferguson built and branded unique products and implements beyond tractors and hay equipment. The Ski Whiz was styled after successful Massey Ferguson tractor models of the ’60s and ’70s. Jake Ruestman managed to keep the original red paint on this model found in Wisconsin.

Bob Riley has been surrounded by Massey Ferguson tractors on his family farm throughout his life. His father owned two 1100s, an 1130 and an 1150, all purchased from their local Massey Ferguson dealer. Bob bought and completely restored this MF 1150 after noticing it collecting rust under a tree. 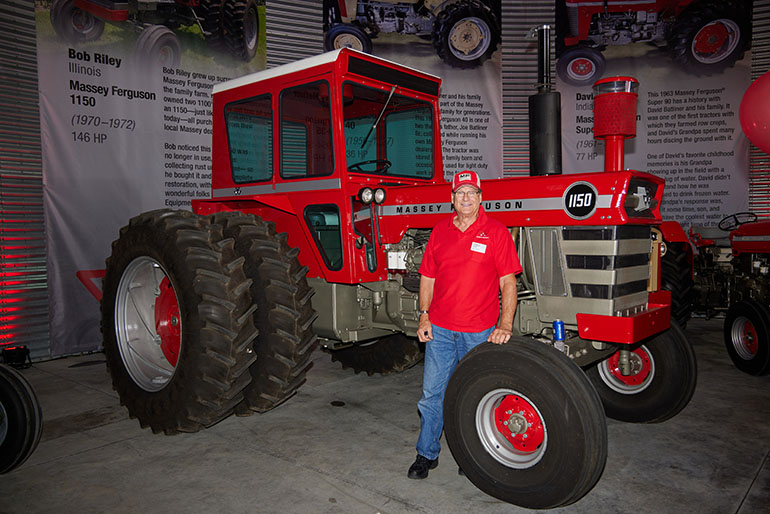 Ron Timmerman’s father exclusively owned Massey Ferguson tractors, a tradition Ron continues. Ron is a retired dairy farmer on a Century Farm now owned by his son. Over the years, the straightforward, dependable design of Massey Ferguson equipment has been invaluable for use in the garden and in the dairy operation. 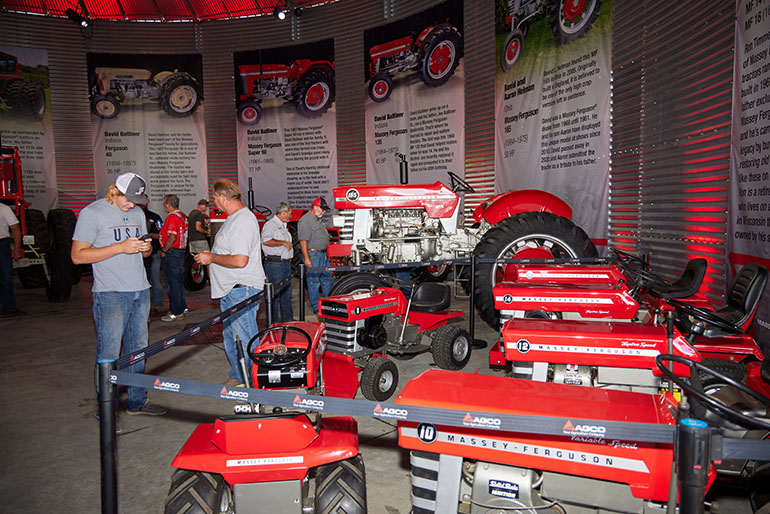 Travis Kuhns has been around Massey Ferguson Equipment his whole life. His grandfather, Abe, started what is now Kuhns Equipment, which has sold Massey tractors since the 1950s. Travis’ dad built this MF 8480 in the mid-2000s for pulling. In 2012, Travis followed in his father’s footsteps and entered the world of Massey Ferguson motorsports.

With more than a million tractors produced and a history that goes back 175 years, Massey Ferguson has established itself as a farmer-focused brand offering agricultural solutions that fit the needs of men and women in the field.

Our latest offering, the Massey Ferguson 8S Series, is a culmination of decades of experience and innovation. Seeing it next to these vintage models at Farm Progress really put the company’s journey from a simple implement manufacturer to a global brand into perspective. Additionally, it gave a visual of how our industry has evolved over time. We’re honored to be a cornerstone of North American agriculture and a reliable partner for past, present and future farmers.

We are proud to recognize the achievements of North America’s Century Farms. The ag industry has come a long way, but the deep roots put down by generational farmers like Ron Timmerman keep us connected to the land and our history. For more great stories of perseverance and success, check out the Century Farm series by our friends at Successful Farming.