Testimonials
27th October 2021
Massey Ferguson helps farm business to diversify with Halloween celebrations
A North Lincolnshire farming family which has for many years relied on a fleet of Massey Ferguson tractors is successfully adding value to its farming business through diversification into activities for the public – and enjoying the experience.

Massey Ferguson tractors have been used at Abbey Farm, Thornton for more than 40 years, and there are three on the current fleet.

The Farrow family has owned the mixed farming enterprise since the 1930s, and current arable crops include wheat, barley, and oilseed rape as well as lupins which were added this year for their high protein content and are replacing soya as a constituent in the livestock feed.

There is also a large flock of breeding mule ewes and mule crosses, put to Beltex rams and producing lambs which are finished on the farm. A flock of rare-breed Beltex sheep is grazed on permanent pasture within Higher Level and Entry Level Stewardship schemes. A high-welfare, high-health poultry enterprise fattens chicks for supermarkets and provides organic manure for the land.

The farm is run by John Farrow with his wife Andrea, and their son Andrew. “Traditional mixed farming with arable crops and livestock works well for us, with straw from our arable crops used for our livestock while organic manure keeps our soils in good condition,” explained John. “But we also have to keep looking forward and making the most of new opportunities to add value to everything we do.”

The farm is near several large towns including Hull, Grimsby, and Scunthorpe, but away from main roads so there is little passing traffic. However, Thornton Abbey - a historic monument is next door and attracts large numbers of visitors at weekends, so four years ago the family created a maize maze on adjacent land and charged for entry.

“Despite being quite basic, the number of visitors to Thornton Abbey Maze increased each year, so for 2021 we planted the maize and some sunflowers on a field nearer our farmyard where water and electricity were available. This meant we could provide better facilities including a cafe, a shop and a large playground, and the sunflowers provided a great photo opportunity for visitors,” explained Andrew who set up the attraction. 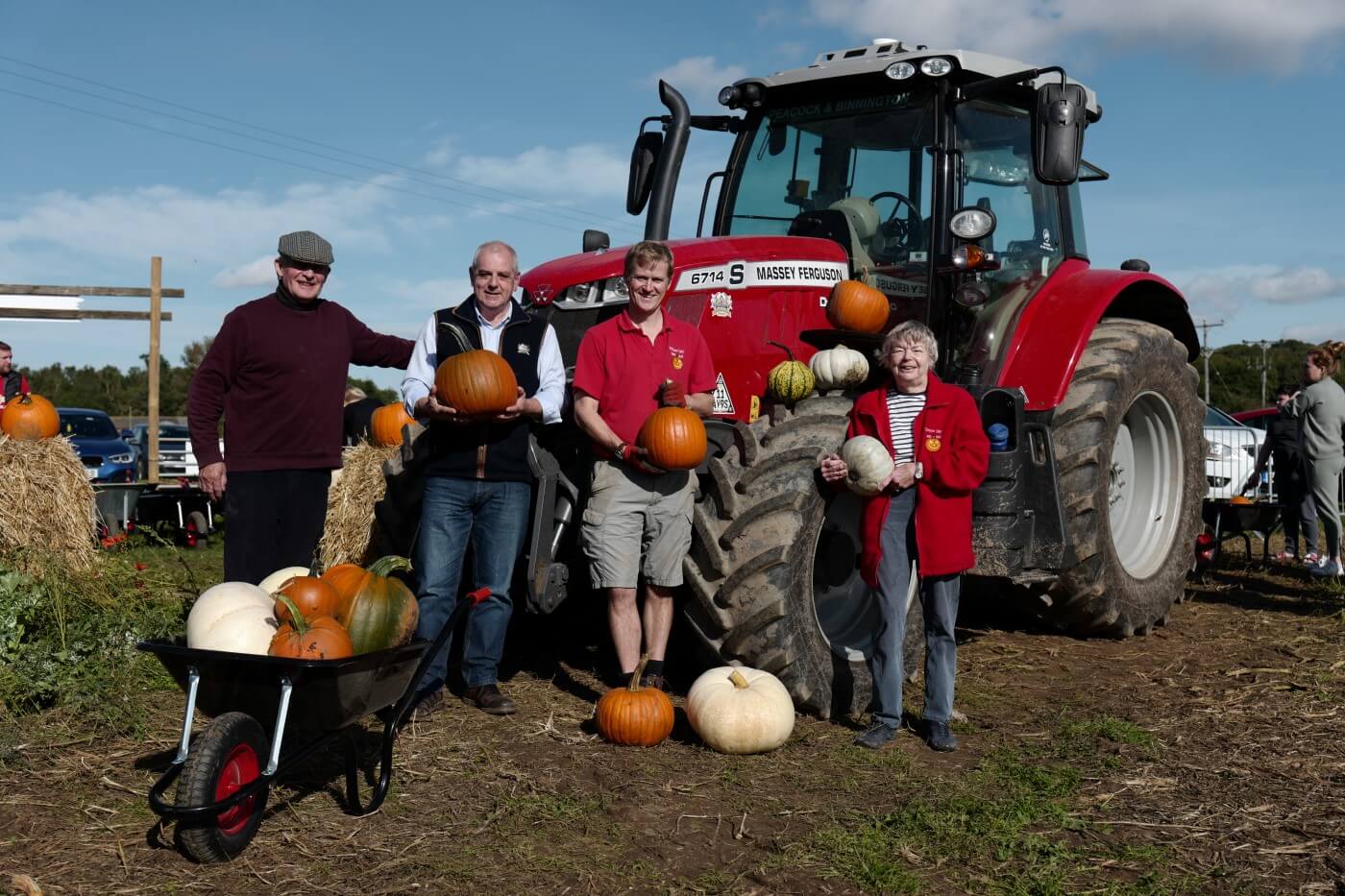 A pick-your-own pumpkin patch was also added this year, in a 4ha field next to the maize maze and opened in early October, just a month after the sunflowers finished flowering. “The pumpkin field, cafe and playground were busy every weekend and demand for pumpkins in the run up to Halloween has been incredible,” Andrew continued.

The Massey Ferguson tractor fleet consists of a 6714S Dyna-6 bought new last year, an older 6465 Dyna-4, and a 22-year-old 4245 which was one of the last built at Coventry. “The 6714S is a lovely tractor – not too big or heavy, and very manoeuvrable,” said John. “It has a lot more technology than our previous tractors, but I quickly got used to it. It helps us operate more accurately and makes us more efficient, and I wouldn’t buy a tractor without it now.”

The 6464 has been on the farm for 12 years and was previously the main drilling tractor, but now that most crops are direct-drilled by a contractor, the tractor’s main role is manure transport and spreading. The smaller 4225 works daily through the winter shredding and spreading straw for the livestock and pulls a trailer giving rides to farm visitors during weekends in the summer. 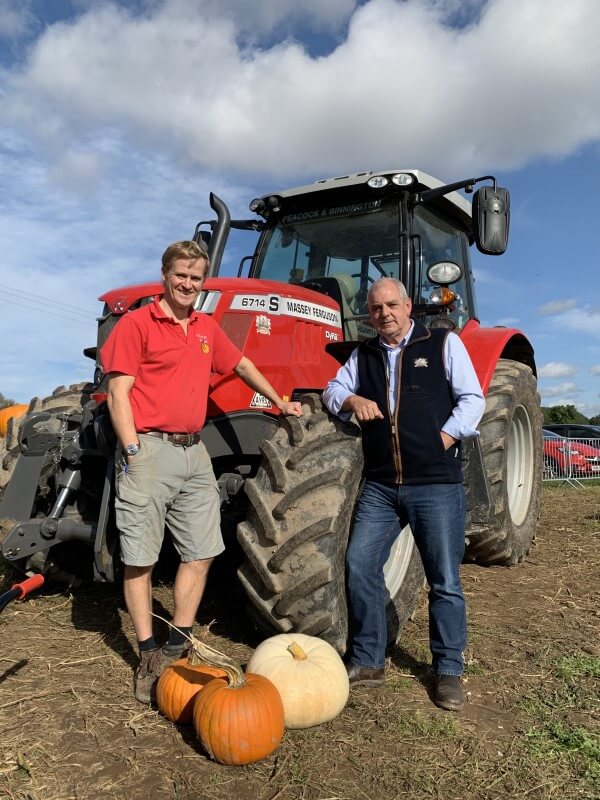 “We used to run a second brand alongside Massey Ferguson, but as new models were introduced they lost their appeal,” John continued. “Since the first Massey Ferguson 135 arrived on our farm the brand has got better and better, and so has the service from our dealer Peacock & Binnington. Despite the business growing over the years it never lost its family feel. Our area sales manager, Ian Hopper is excellent, but whoever we speak to we know we will be looked after. The Brigg depot team is always interested in what we are doing and keen to help but never pushy, and we value that.”

Massey Ferguson recently launched new 5S-series tractors and a demonstrator with a front loader was tried by the farm. “Our 6465 is due for updating, but we haven’t decided whether we will need something larger or smaller in future,” explained John. “Agriculture is in a period of transition, and since we moved to direct-drilling and have continued building the organic matter content with manure applications, the ground has become easier to work and smaller, lighter tractors are adequate.”

John said visitors get a lot of pleasure from visiting the farm and the diversification is proving profitable. “We love seeing families enjoying their time with us. Many are from areas where landscapes are dominated by heavy industry, and for a lot of the children it’s a rare opportunity to visit a farm. We find it rewarding knowing that we are providing something for children to do that is an alternative to computer games or electronic tablets for a few hours, and are already planning lambing weekends as an additional attraction for the spring.

“When families visit the farm, they are happy and the children are smiling – that’s important.” 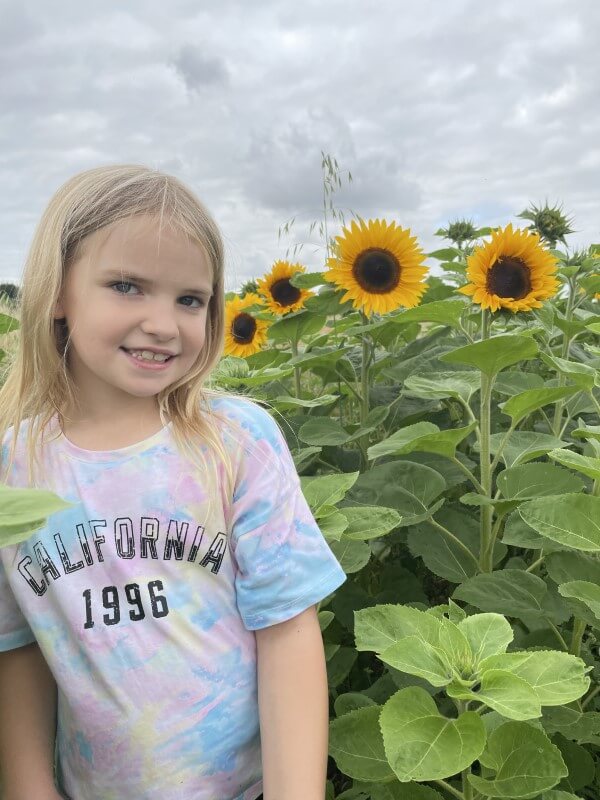