Massey Ferguson, a worldwide brand of AGCO (NYSE:AGCO) has joined forces with its dealer P V Dobson to fund a brand-new MF tractor slide for a playground in a farming village in Cumbria.

The bespoke wooden tractor, standing 2-metres high, is the centrepiece of the play area in Levens, near Kendal. Importantly, it is dedicated to the memory of Alan Dobson, former partner of P V Dobson, who sadly died last year and who played an active part in village life and was a leading figure in local agriculture.

Massey Ferguson’s red tractors and equipment are an integral part of the landscape in south Lakeland and PV Dobson is a key agricultural business in the area with headquarters in Levens, where it has been based since the 1930s.

“The MF tractor is the focal point of the new playground,” says Alice Sharples, Treasurer of the Levens Playing Field Committee which is masterminding a project to rejuvenate the village’s play equipment. “It celebrates Levens’ farming community and connections to the land, and is a wonderful tribute to Alan Dobson who did so much for the village. We wanted a unique piece of outdoor equipment and the tractor certainly adds a real wow factor to the play area. On behalf of the children and the village, a big thank you to Massey Ferguson and PV Dobson for their generous donation.”

Modelled on the MF 7700 range, the hand-made tractor features crawl-through wheels and engine bay, climbing bars to the cab and a slide to the rear. 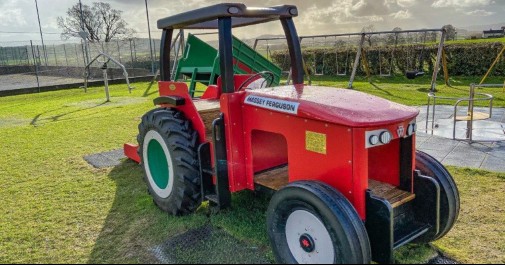 Andrew Dobson, Alan’s son and Partner at PV Dobson comments: “The tractor looks fantastic and the kids love it. It’s the perfect way to remember our late father – he would have wanted a memorial that was practical and beneficial to the village, especially something that the children could enjoy.”

Alan Dobson was a key member of the Playing Field Committee back in the 1970s and chairman of governors at the neighbouring Levens C of E school. Indeed, four generations of the Dobson family have attended the school since the First World War.

The family’s agricultural machinery business, P V Dobson was set up by Alan’s father, Percy Victor Dobson, in the 1940s. Alan joined the firm in 1958 at the age of twenty and was involved in the running of the operation right up to his death in September 2019. The company has been a Massey Ferguson dealer for over 50 years.

“We were delighted to team up with PV Dobson to support this super new addition to the Levens’ playground and to celebrate the memory of Alan Dobson,” says Lindsay Haddon, Massey Ferguson Advertising and Sales Promotion Manager. “It’s a lasting and fitting tribute to Alan who played such a big part in the local farming community and was always a great ambassador for Massey Ferguson.”

The tractor slide was custom-made by Flights of Fantasy of Kings Lynn. 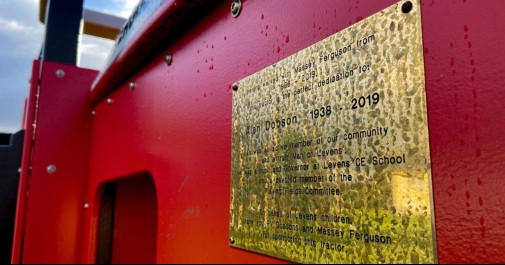