Testimonials
27th February 2021
TRIO OF MF 5713 S NEXT TRACTORS PROVE FRUITFUL PARTNERS AT LEADING BERRY PRODUCER
“The machines work with trailers in fruit transport, move coir and poly tunnels, mow field margins and grade tracks. On the arable side, we use them for spraying, rolling and fertilizer spreading,” he comments. “What really stands out is their power-to-weight ratio which is excellent – they are very nippy machines. Their light footprint is essential because of all the winter work we do.”

Did you know that British consumers are eating twice as many strawberries as they did 20 years ago?

The berry business is fast-moving - it’s important to keep driving forward to feed the nation’s burgeoning appetite for soft fruit all year round.

Hugh Lowe Farms (HLF) in Kent, one of the UK’s leading soft fruit growers, harvests a mouth-watering 6000 tonnes of strawberries, raspberries and blackberries from April to December. Among their customers are the main retail multiples, premium outlets, farm shops and London markets. For many years, they’ve been a supplier to the Wimbledon Tennis Championships – just about the most famous strawberry-eating event on the planet.

Investment in technology and equipment underpins HLF’s goal to grow even better berries in the most sustainable way possible.

Among the latest pieces of kit to arrive at HLF’s operations at Barons Place – located on the sunny slopes overlooking the Weald in Kent - are three 130hp MF 5713 S Next Edition tractors in striking black livery. “The tractors look great in this colour,” remarks Tom Pearson, Production Director at HLF. “In fact, my kids love them so much, I’ve painted one of their red MF toy pedal tractors in black to match!”

The HLF family business started in 1893 when Bernard Champion established himself in the village of Mereworth, near Maidstone with an ambition to become a leading fruit grower and supply the ready London market nearby. Wild strawberries thrived in the local woods so he planted his first crop that year. Bernard’s grandson, Hugh Lowe took over in 1955 and his daughter, Marion Regan now owns and runs it with husband Jon Regan.

The farmed area extends to over 700ha – all located within a 15 mile radius of the Barons Place hub. Of this, more than 140 ha are soft fruit, while a further 4ha are dedicated to vines. Glasshouses, which help to extend the picking season, cover 3ha. The rest is a mixture of arable (500ha), grassland (40ha) and woodland (20ha). At peak harvest, 700 seasonal workers join the 60 permanent employees.

Sustainability and bio-diversity are central to the family’s farming philosophy of ‘Sharing and Sparing’. Some 15% of the land is managed for wildlife habitats. The aim is to share the crops with beneficial wildlife and spare the land next door for nature, to build a productive berry ecosystem. Field margins, for example, are sown with wild flowers to encourage pollinators and the farm is home to 100 bee hives.

“The strawberries are the mainstay of the operation and are cultivated in poly tunnels using table-top systems planted in coir (fibre from coconut husks),” explains Tom. He joined the HLF team full-time in 2002 after spending his work placement there from Harper Adams University.

The three MF 5713 S Next models were supplied by local Massey Ferguson dealer, Agwood based in Linton and delivered in March 2020.

“We get on well with the guys at Agwood - they are always responsive and helpful,” says Tom.

“The black Masseys are our runaround tractors – they are used every day, all year round. They’re mostly involved in logistics – we do a lot of moving stuff around!” 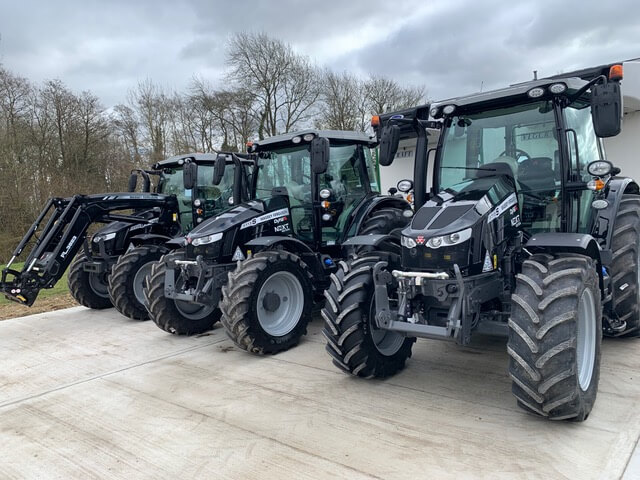 “The machines work with trailers in fruit transport, move coir and poly tunnels, mow field margins and grade tracks. On the arable side, we use them for spraying, rolling and fertilizer spreading,” he comments. “What really stands out is their power-to-weight ratio which is excellent – they are very nippy machines. Their light footprint is essential because of all the winter work we do.”

“We had three MF 5600 Series on the farm for many years and bought the MF 5713 S models to replace them. The MF 5600s clocked up around 9000 hours each and were really reliable. This reliability makes us to stay loyal to the MF brand.”

“The MF 5713’s manoeuvrability and tight turning circle are especially good when collecting fruit around the poly tunnels. As much of our work is in confined spaces, another big plus is the visibility from the steep nose bonnet. Berry production is labour intensive and there’s always a lot of people around so you need to be able to see clearly from the cab from a safety point of view,” Tom continues.

“The layout of the controls is straightforward. It’s easy to hitch up the trailers, and the rocker switch inside the cab is great for lifting the linkage. Our drivers appreciate the comfort of the cab too. They do plenty of roadwork, moving between our locations and spend long hours behind the wheel. The cab suspension certainly gives a nice, smooth ride.”

“We are always looking to make efficiencies and, when selecting the tractors, fuel consumption was a key criteria,” he remarks. “We measure and monitor fuel use and the MF machines perform well on operational efficiency.” “The big advantage of the tractors is that they are user-friendly and not too complicated but still have all the technology that we need to the job,” Tom concludes.