Wrapping Time to Save Quality

What happens during the first 24 hours after a bale of silage is formed but not yet wrapped? Can forage quality be improved if the bale is wrapped even sooner than 24 hours after baling? The short answer: yes.

We already know it’s important to quickly wrap bales after they’re formed to ensure forage properly ferments and reaches its greatest feeding value. Baled silage, or baleage, is forage baled at a higher moisture content than dry hay, then wrapped in plastic to eliminate oxygen and allow anaerobic fermentation to occur. During the fermentation process, the available sugars and carbohydrates in the crop are converted into desirable propionic and acetic acids that preserve the forage and enhance its nutritional quality. Baling is typically done 24 hours to several days after the silage is cut.

But research conducted by Dr. Dan Undersander at the University of Wisconsin shows that bales should be wrapped within 24 hours after baling to obtain the greatest forage quality and maintain a lower internal bale temperature. Bale temperatures higher than 120ºF can reduce available protein and burn up plant sugars that then cannot be converted to beneficial acids, which reduces overall feed value.

To further investigate the 24-hour recommendation, AGCO conducted a study near Kennett Square in southeastern Pennsylvania during the summer of 2020 to determine whether time of wrapping after baling affects forage quality in mixed cool-season grass silage bales.

The trial was conducted on second-cutting, mixed cool-season, perennial grass. Thirty bales were randomly selected for each treatment throughout the field and were wrapped at five time points after baling: immediately after baling (these bales were considered the experiment’s control group) and two, four, eight and 24 hours after baling. Six bales were wrapped per treatment and were marked with the time of baling to determine time of wrapping.

Control bales were baled, then wrapped as they were leaving the bale chamber using an all-in-one implement, a baler and wrapper combination. It wraps the bale as soon as it leaves the bale chamber – before it hits the ground.

Bales in the two-, four-, eight- and 24-hour treatment groups were hauled from the field and wrapped at the storage location with a stand-alone wrapper. All bales in all treatments were wrapped with eight layers of 1 ml white polyurethane plastic. Eight cores were taken from each bale immediately before wrapping and again at 28 days after baling to compare differences in the nutritive value of the forage after fermentation stopped.

Testing for various acids in the forage showed bales wrapped immediately after baling had the greatest lactic-to-acetic acid profile, indicating superior fermentation, in relation to the two-, four-, eight- and 24-hour treatments. Because lactic acid is the fermentation byproduct with the greatest preservative effect, a better lactic-to-acetic profile also provides longer bunk life for the forage after the plastic is removed and the silage is exposed to oxygen.

Bales wrapped immediately after baling were the only ones that contained no detectable butyric acid which, if present at a certain threshold, can be a sign of spoilage. Butyric acid was detected at a 0.2% level in the two-, four- and eight-hour treatments, but the level increased dramatically to 0.55% at the 24-hour point. However, even that level of butyric acid was not enough to cause harm to livestock. Nevertheless, it’s an indication spoilage could occur at a faster rate after the plastic is removed and the bale is set out to feed.

Volatile fatty acid (VFA) score is a calculated value derived by Dairy One in Ithaca, New York, the analytical lab used to verify the study results. VFA combines multiple measurements into a single value that directly reflects the success or failure of the fermentation process based on the fermentation profile of the forage sample. At day 28, VFA scores (Figure 1) were highest in bales wrapped immediately after baling, were similar among the two-, four- and eight-hour treatments but declined sharply in bales wrapped after 24 hours. 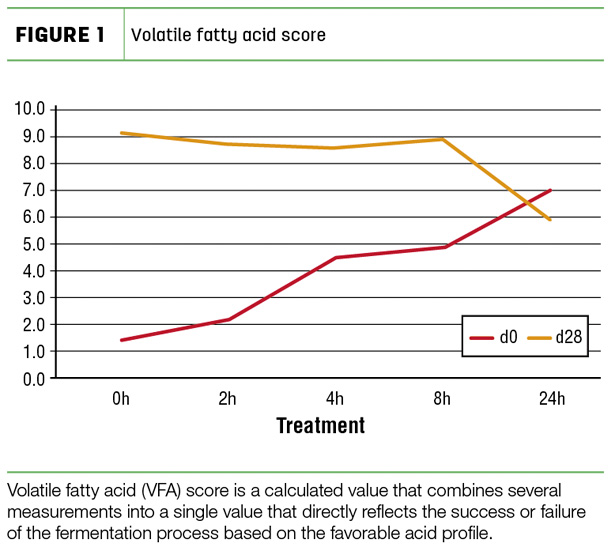 These results suggest wrapping bales one day (24 hours) or more after baling can lead to a decline in overall forage preservation and fermentation quality.

Total digestible nutrients (TDN) is a calculation that derives the total value of the fiber, protein, lipid and carbohydrate components of a feedstuff or diet. TDN is directly related to digestible energy and is often calculated based on acid detergent fiber (ADF) – the lignin and cellulose fiber components of the cell wall that indicate the digestibility of a forage. At day 28, TDN also declined more significantly for the 24-hour treatment compared to the other four treatments (Figure 2). 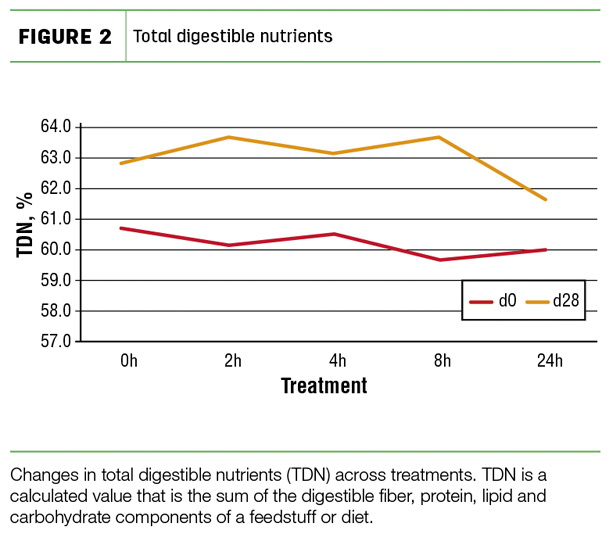 According to the text, “Nutrient Requirements of Beef Cattle,” published by the National Research Council, a 1% to 2% improvement in TDN would yield an additional 0.1 pound per day of gain on a growing steer. The results of the study show that wrapping high-moisture forage bales within eight hours or as soon after baling as possible improves the nutritive value of the forage.

The results of this study show that improved nutritional value of round bale silage, leading to potential improved animal performance, can occur when the bale is wrapped within eight hours of baling. The all-in-one combination baler allows the wrapping process to occur while the next bale is being rolled in the chamber, saving time and labor (Table 1).

On the other hand, using a stand-alone wrapper to wrap individual bales as soon as they come out of the baler can take anywhere from two to three minutes per bale. To get the same forage quality benefits using a traditional setup with a stand-alone wrapper, four people would be needed to reduce the time between baling and wrapping – one to bale, one to haul the bales to the wrapper, one to load the bales into the wrapper and a fourth to wrap the bales. With the combination machine, one person can form and wrap the bales right away to ensure maximum quality and can then haul the bales to their storage location after baling (Table 1). 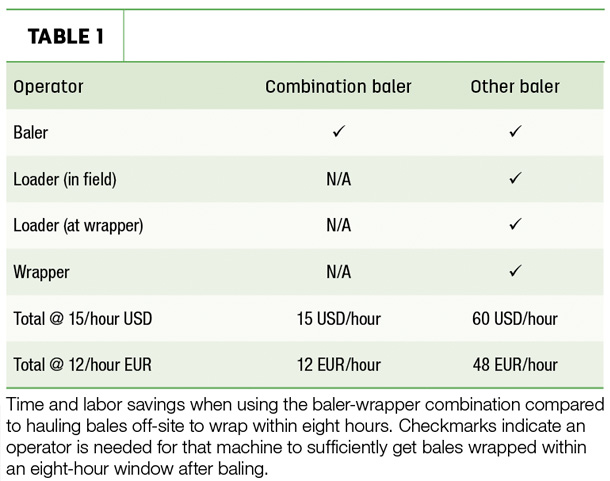 With labor at $15 per hour, that’s a labor cost savings of $45 per hour compared to the cost of hauling bales to an off-site location for wrapping.

This column originally appeared on the May Issue of Progressive Forage magazine, which holds the copyright. https://www.progressiveforage.com/forage-production/harvest-and-storage/wrapping-time-to-save-quality 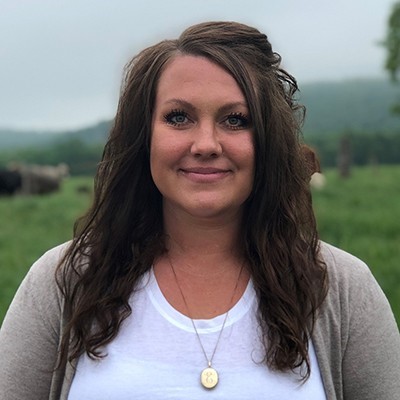