Testimonials
2nd July 2021
Massey Ferguson’s latest 8S-series tractors are the best on the market, according to a North Yorkshire contractor.
Based at Grassington, near Skipton, the Walmsley family have been agricultural contracting for more than 45 years and they rely on a fleet of Massey Ferguson tractors and back-up from local dealer PV Dobson & Sons.

The contracting business was started by Lister Walmsley who also had a livestock farm with sheep and a beef suckler herd. Slurry and manure applications were a speciality and Lister travelled from farm to farm with a 500-gallon tanker emptying slurry pits and applying the liquid to grassland. Manure was applied through a trailed spreader behind a tractor with a rear linkage-mounted loader, allowing one-man operation.

The business grew when Lister’s sons David and Jonny joined the business, and civil engineering, baling and forage harvesting plus arable field work were added to the list of services. Trading as Walmsley’s Agricultural Contractors Ltd, the father and sons continue working together, but Jonny specialises in construction work, baling and forage harvesting while David has continued to expand the slurry and manure handling operation and operates a fleet of eight tankers and two umbilical systems. 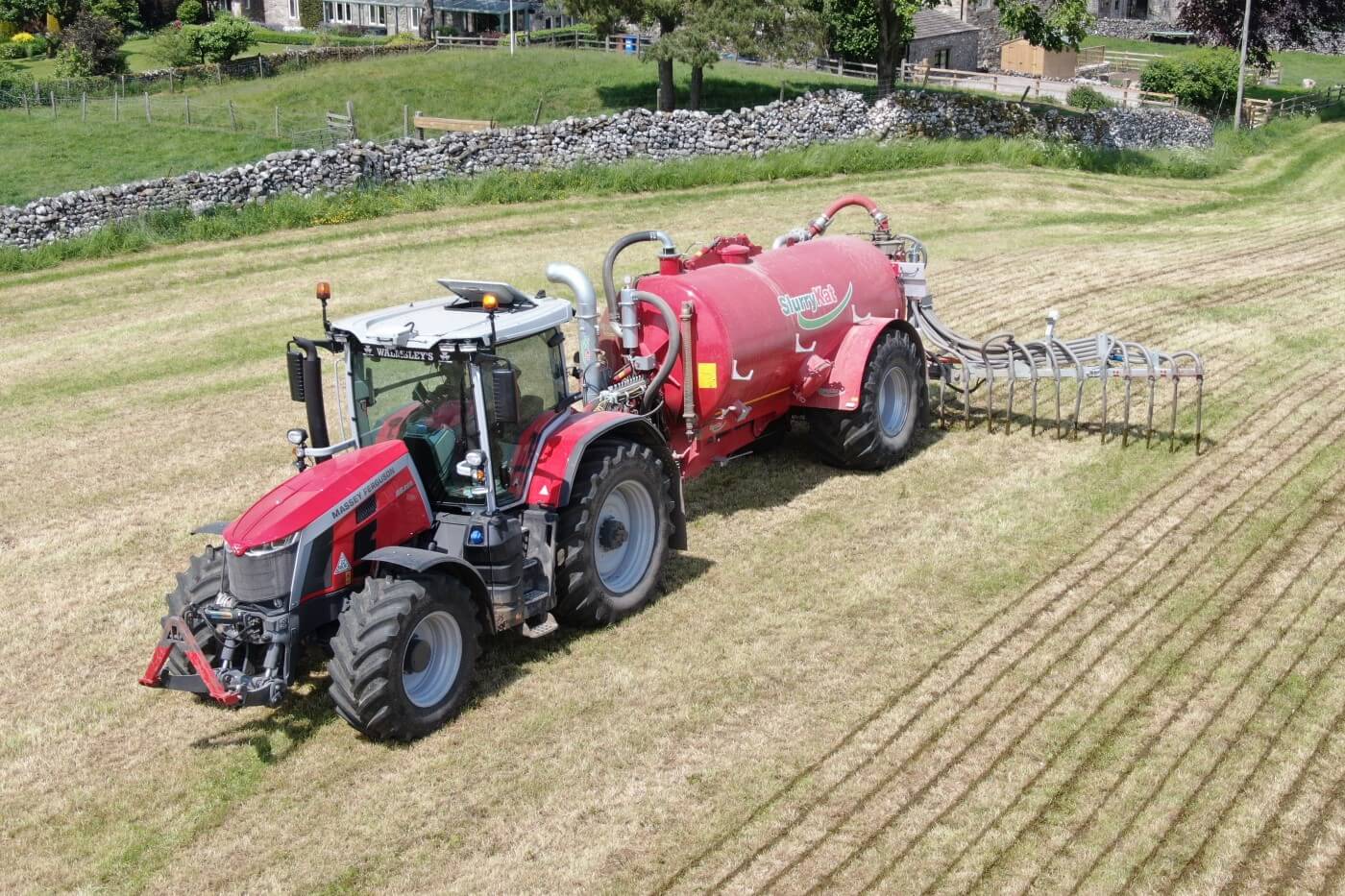 The current tractor fleet consists of a Massey Ferguson 6270, an 8240 Extra, two 7720-S, two 7718-S and a new 8S.225. “Grey Fergusons were used in the 1950’s and 1960’s and our first new tractor was a Massey Ferguson 135 bought in 1971. We have always been loyal to the brand,” explained David. “Last year we replaced a Massey Ferguson with another make for a contract involving a lot of road work but it proved no more efficient - the service and repair costs were twice as high and it was unreliable, so after only nine months it had to go. We should have stuck with the brand we knew.” 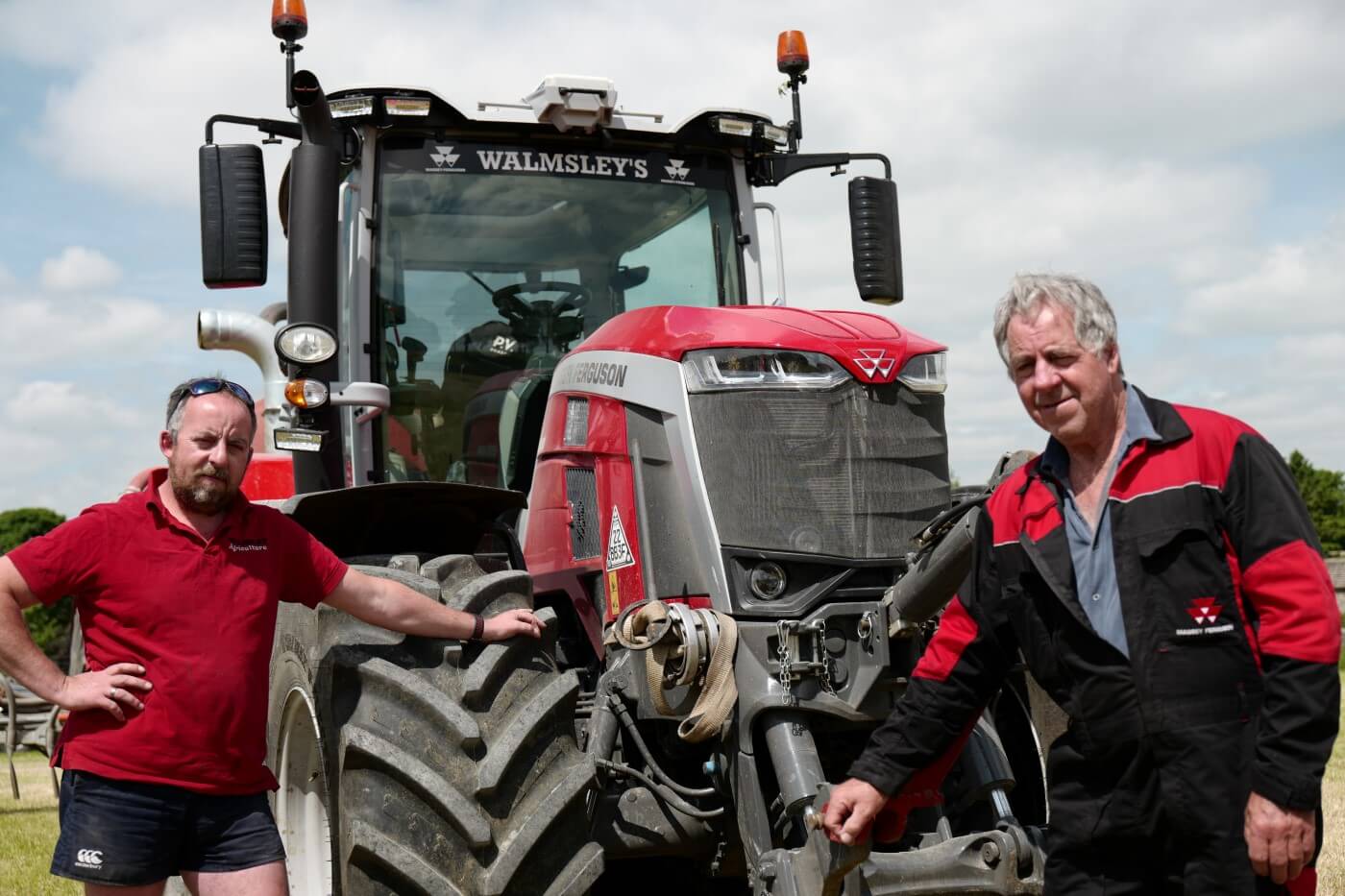 David Walmsley and his father Lister are pictured with their new Massey Ferguson 8S.225.

The new 8S.225 replaced a 7720 which had clocked up 7,000 hours but was still completely reliable. “We travel up to 60 miles from our Grassington base, and for peace of mind we usually replace tractors at 3–4 years old when they have worked 6,000–8,000 hours, although we have very few problems with our Massey Fergusons,” continued David. “We hadn’t considered the new 8S, and were thinking of dropping a size to the 7718-S, but our Dobson’s area sales representative Will Bell suggested we tried the new 8S instead. We had the tractor for a week, but by the end of the first day we had already decided to buy it. It almost sold itself, and with Massey Ferguson’s attractive finance package available too, the deal made sense and we placed an order for our tractor which arrived in late April.”

The Walmsley’s Massey Ferguson 8S.225 recorded more than 650 working hours in its first six weeks, applying slurry to land in the Grassington area. Applications are charged by the cubic metre and the new tractor’s precision farming systems will make it easier to maintain accurate records.

In its first six weeks the 8S.225 worked more than 650 hours and David remains impressed. “The cab is superb, and there is plenty of space. We often use the passenger seat and even with two large adults in the cab all day it remains comfortable.

“It’s also amazingly quiet, and there are no rattles or loose trim. Air outlets throughout the cab are a great feature as they distribute warm or cold air better than the roof-mounted vents in our other tractors, and they keep my feet warm too,” he added. “Visibility all around is excellent – the windscreen is huge, and I’m impressed by the front wiper design which keeps the whole screen clear.”

As well as being comfortable, David said the new cab is very well designed with controls ideally positioned and all within easy reach on the armrest. He also likes the joystick-operated trailer hitch with lift and lower, and extend and retract all selected by one lever. His only criticism is the ignition switch location, close to the operator’s right leg where the key is easily knocked and bent. 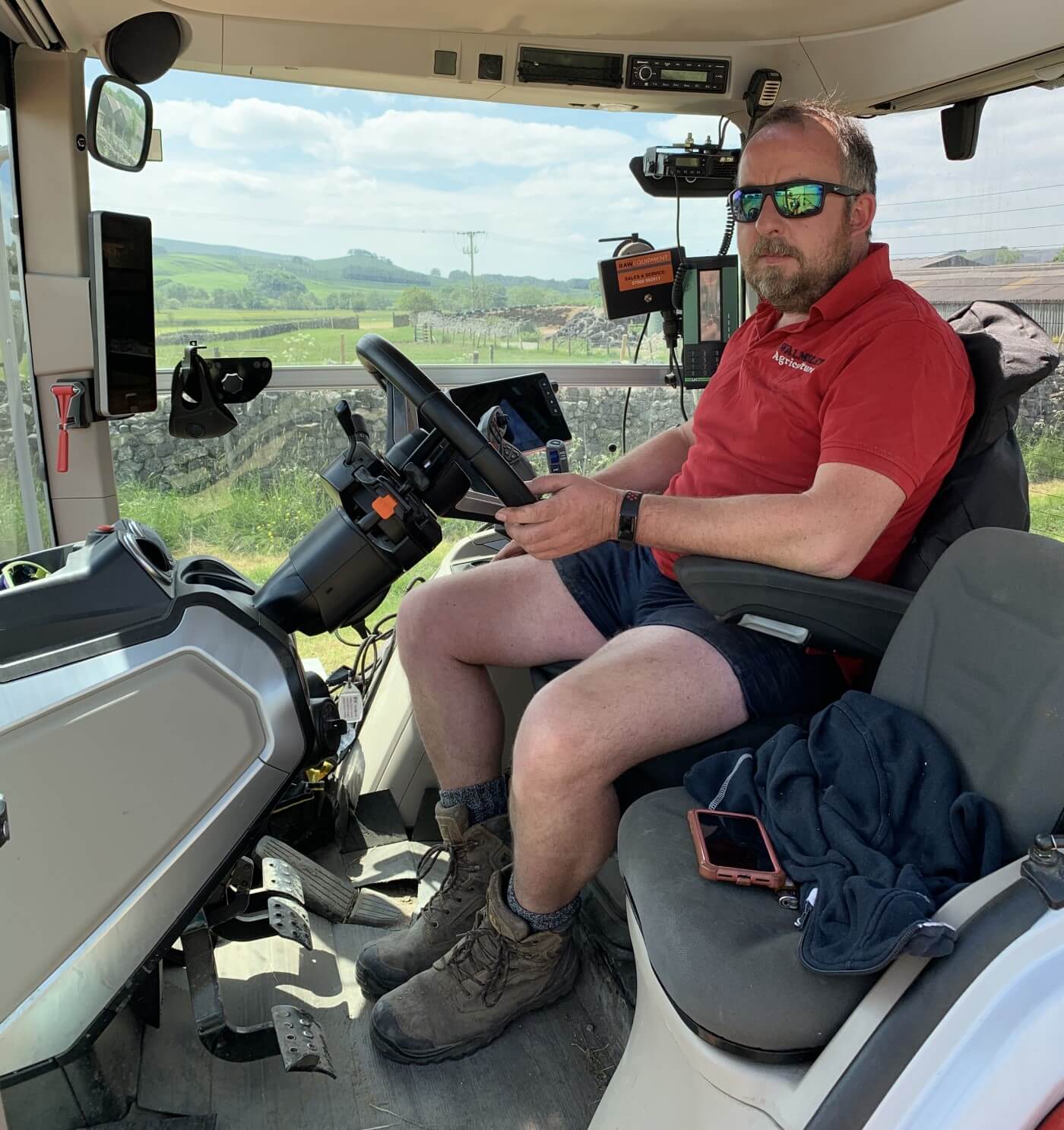 Dave Walmsley says the new cab is superb with a high standard of finish, no rattles or loose trim, excellent heating and ventilation, and low noise levels.

The Datatronic 7 terminal is used to run MF Guide GPS guidance and autosteer, and David said this is clear and easy to use.  “We used light bar guidance for years before upgrading to an AutoGuide 3000 system on a Massey Ferguson 7718 in 2016,” continued David. “Now three of our tractors have full autosteer and as well as improving the accuracy of applications it also takes a lot of stress out of the job. We use flow meters and accurately control application rates and with the GPS mapping we can keep accurate records of everything applied. We charge a proper rate for a professional service based on the volume applied rather than by the hour and we have a contract with the Environment Agency so we have to be able to maintain proper records. The Massey Ferguson precision farming systems help us achieve this.”

Asked about fuel consumption, David said that the 8S seems similar to his other tractors in spite of its extra size and power. “Where we do see a difference is for road work when the new 8S.225 appears more economical. All of our other tractors since 2009 have had Dyna-6 transmissions. These are ideal for our work and in more than 37,500 working hours using Dyna-6-equipped tractors we have never had a transmission problem. However, the new Dyna-7 seems even better. Extra overlap between the gears makes changes a lot smoother, and the higher top gear means that at 50kph the engine runs at only 1,600rpm. We believe this contributes to lower fuel consumption, and less AdBlue is used too.” 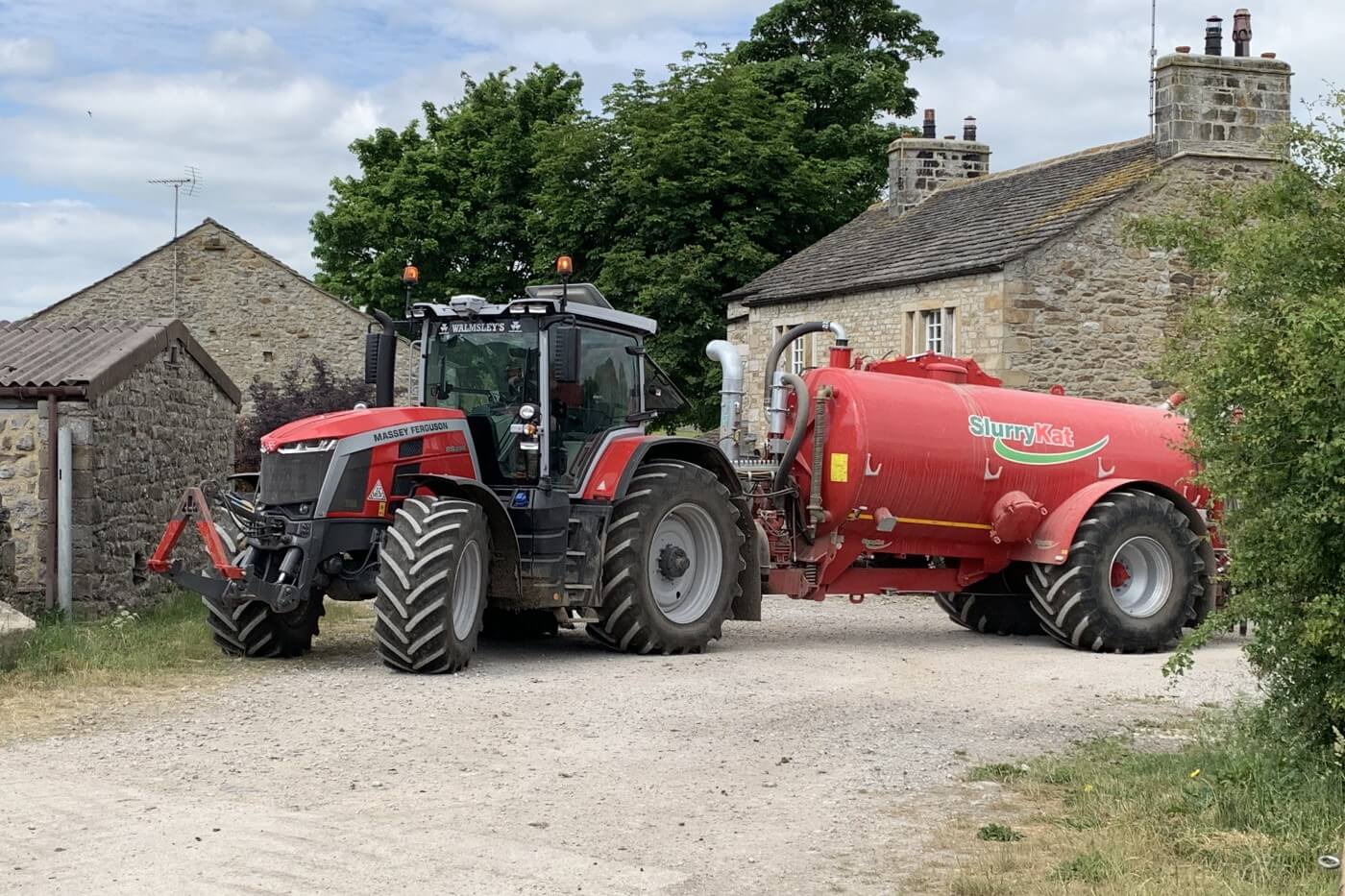 The new tractor has plenty of power and excellent brakes allowing it to cope easily with steep hills in the area. The Walmsleys say ride comfort is superb – partly due to the effective suspension, but also because the Dyna-7’s gear changes are so smooth.

The 8S.225 is the Walmsley’s first tractor with MF Connect telematics. MF Connect allows the owner to check the tractor’s status and location remotely at any time through a smartphone app. With the owner’s consent, authorised dealers can also access the data to monitor when servicing is due, and check recent operating history and for fault codes if a breakdown occurs. “I can see this being a big advantage in our large operating area, making it easier for engineers to find the tractor if it is working out of sight of the road,” suggested David.

“We all like the new 8S.225,” confirmed Lister. “It’s a big unbreakable tractor and the design is a clever mix of retro and modern - from every angle it looks good. Local dealers often ask us to try their tractors and we have demonstrations, but we prefer the Massey Fergusons. We have no issues with them, we can’t fault the running costs and the service from PV Dobson is always very good. There is no reason to change.”

“We can’t fault our 7700-series tractors, but the new 8S is even better, and leagues above other brands we have tried, including those considered ‘premium’,” David stressed. “I would say that in terms of build quality and finish there is nothing better on the market, and everything about the 8S has been properly designed right down to the smallest details.

“The level of comfort is amazing and it’s so easy to drive. I feel noticeably less tired after a long working day in the cab than when I have been driving our other tractors, and when we next update a tractor it will almost certainly be for a similar model.” 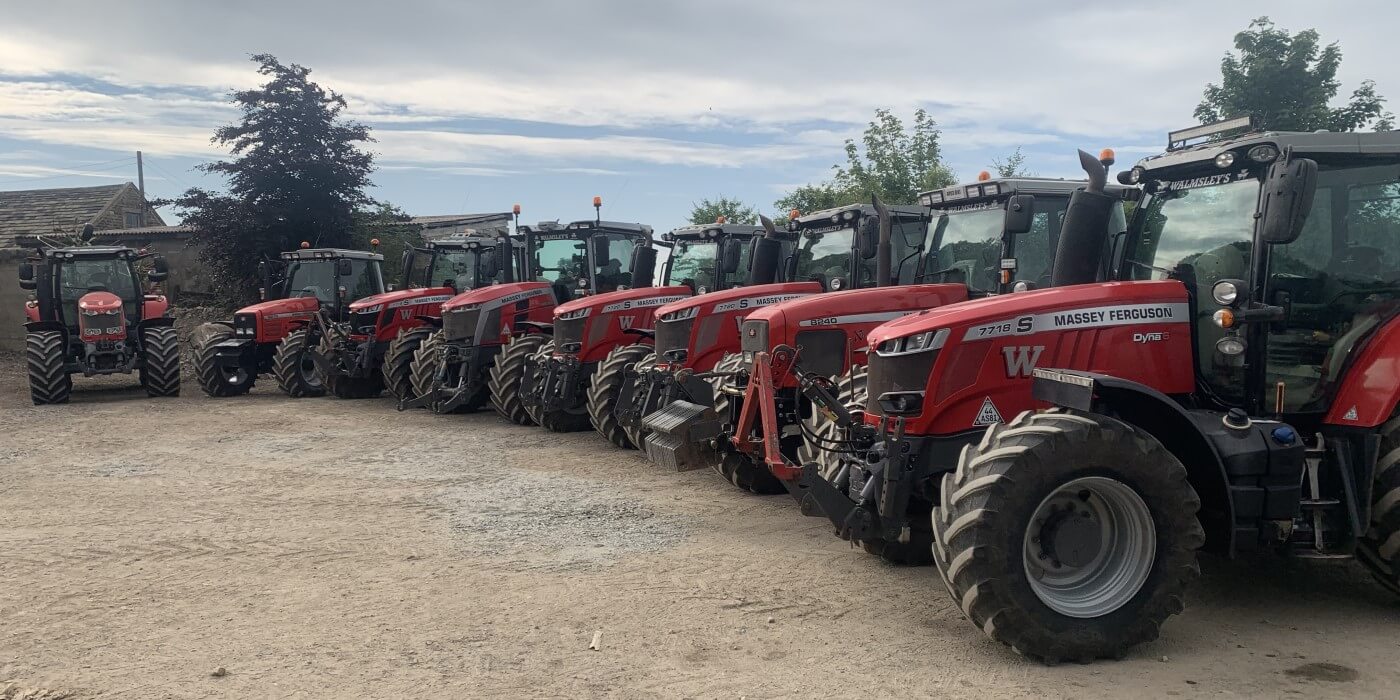 The Walmsley’s fleet of eight Massey Ferguson tractors, including the new 8S.225. David said it is likely that another 8S-series tractor will join the fleet when the next tractor is due for replacement.