Testimonials
17th February 2020
CONSISTENT BALES AND CONVENIENT OPERATION
“It’s proved extremely reliable in the four years we have used it and any improvements we might have suggested have been addressed on the latest version. While other manufacturers seem to have lost interest in conventional baler development Massey Ferguson continues to improve them. That’s why we didn’t hesitate in ordering two brand new 1840 balers for our growing business.”

An Essex farm is investing in two new Massey Ferguson conventional balers for this season, after its previous five-year-old machine remained reliable after making 350,000 bales.

Trading as Peter Carr & Sons, the Carr family farms near Maldon and uses approximately 60,000 hay and straw bales each year between its turkey rearing enterprise and sales to local customers. An expanding contract baling service is also offered. “We use small conventional bales as the only safe way to distribute straw to turkey pens is by hand,” explained baler operator Tom Carr. “Other turkey producers nearby also use small bales, and we supply them too as well as selling to dealers and merchants further afield.”

Previously an offset baler with a towed flat-eight sledge was used but, to improve bale handling, a Bale Baron 21-bale accumulator was purchased. The accumulator worked well, but bales of variable length led to stacking problems and the baler’s offset drawbar caused transport issues. In 2014, in partnership with a nearby contractor, the Carrs bought one of the first Massey Ferguson 1840 in-line balers and with its ability to produce uniform bales of consistent length and weight it solved the problems. 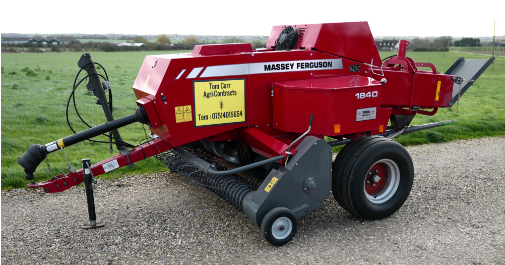 The Massey Ferguson 1840 in-line baler has proved extremely reliable while baling up to 90,000 bales per year. Up to 650 straw bales per hour have been achieved in ideal conditions.

A year later the Carrs bought their own year-old Massey Ferguson 1840 baler with a Bale Baron accumulator and took on additional contract hay baling work. “The in-line baler is ideal,” explained Tom. “It’s narrow so nothing sticks out beyond the tractor making transport easier and not having to offset the hitch at the start and finish of each field saves time, especially for contract hay baling where small paddocks with narrow gateways are typical. Also, because the tractor, baler and accumulator run along the same swath, the field can be baled in any pattern without dropped bales creating an obstruction.”

Last year 90,000 bales were made of which 60,000 were used or sold by the family, and 30,000 were on contract for others. Tom said the 1.93m pick-up handles swaths from larger combines without problems and in ideal conditions up to 650 straw bales per hour are produced. “Daily maintenance takes about 20 minutes, including manual greasing of all the lubrication points and refilling the string boxes which hold enough for 5,000 bales,” he added. “Automatic lubrication would be useful, but we do in two years what most owners do in a baler’s lifetime, so going around it with the grease gun is something we accept.” 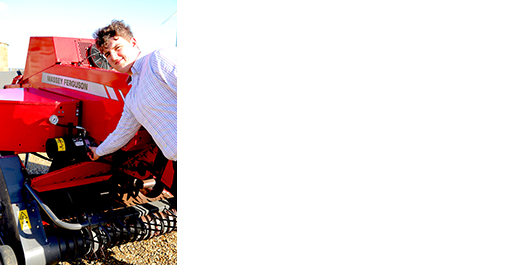 The Carrs aim to increase their contract work and believe the Massey Ferguson 1840 baler and Bale Baron gives them the ideal combination. “Bales of uniform size are easier to handle, stack and transport, and their consistent weight appeals to those selling them on,” added Tom. “It’s proved extremely reliable in the four years we have used it and any improvements we might have suggested have been addressed on the latest version. While other manufacturers seem to have lost interest in conventional baler development Massey Ferguson continues to improve them. That’s why we didn’t hesitate in ordering two brand new 1840 balers for our growing business.”