Testimonials
22nd October 2020
GLOBAL SOLUTION FOR TRADITIONAL FARM
“Not many manufacturers offer simple, practical tractors with such a modern, user-friendly design but for a business like Heath Farm Suffolk, the Global-Series is exactly what’s needed.”

Heath Farm Suffolk was set up in 2012 as a partnership between Katie Mitcham-Henry and Mike Phillips and is based near Bury St Edmunds. The business has grown from an original flock of 14 rare-breed sheep, and now includes over 300 grass-fed ewes, a herd of English Longhorn cattle, and Oxford Sandy & Black and Saddleback pigs, plus turkeys, alpacas and bees. The business has won several major awards and was featured on BBC’s Countryfile. New ventures include a micro-dairy which is currently under construction and which will begin supplying premium quality milk later this year. All the livestock are kept in an environment which is natural as possible with maximum space to roam, and Katie and Mike maintain their belief that the best produce results from waiting patiently for livestock to mature, rather than rushing the process.

Approximately 40ha of permanent grassland is managed, much of it within ELS and HLS stewardship schemes. This provides grazing, forage and haylage, while additional feed including cereals is sourced locally. The livestock require a lot of straw which is also from nearby farms. An elderly 1990’s tractor with a front loader was relied on for all yard, field and transport tasks, but in Spring 2019 Mike decided he needed something more efficient, as the workload grew with the business.

“I wanted a simple and reliable tractor, with minimal electronics and which wouldn’t require expensive repairs,” Mike explained. “It would be used every day, so it had to be modern, comfortable and safe.” Options considered included a three-year old 95hp Massey Ferguson 4709 with a 946X front loader. It had worked less than 4,000 hours and was available for a reasonable price from the local main dealer, Thurlow Nunn Standen (TNS). Mike arranged a demonstration of the second-hand tractor with Area Sales Representative, Richard King and was impressed by its comfort and performance. The tractor was ordered and arrived in time for the grass harvesting season and it did all the farm’s mowing, tedding, raking and baling, plus bale loading and transport.

During its 12 months at Heath Farm the 4709 was used daily, and its workload included mucking out, general trailer and yard tasks, and winter stock work delivering feed and bedding to the cattle. “It was ideal,” said Mike. “It worked approximately 800 hours and was much more comfortable than the elderly tractor it replaced. The modern design is excellent including a superb cab with great all-around visibility, and it is extremely manoeuvrable.”

The farm’s round baler is an elderly Welger RP200 and Mike said that although the 4709 completed the silage, haylage and straw baling season without incident, it proved a little under-powered. As bales were nearing completion and the baler required more power, he had to change down two gears each time to reduce the working load.

With the farm continuing to grow, Mike decided that investing in a new, more powerful tractor was justified, and another Massey Ferguson was the obvious choice. Again, he asked the advice of Richard King who recommended a larger 5710 with a 4-cyl, 4.4-litre engine developing 100hp and 410Nm of torque, to replace the 4709 which had a 3-cyl, 3.3-litre engine producing 95hp and 355Nm of torque. The new tractor was ordered and arrived in late May, part-way through the grass harvest.

Mike said that as well as having more power, the newer 5710 offers additional advantages. “The 4709 was very comfortable, but the 5710 feels even more refined and it’s smoother. The visibility is great for yard and field work and the wide rear window allows a great view of the push-out hitch when backing up to trailers. With its extra power and torque, the 5710 is well matched to the baler and there was no problem maintaining a constant speed which improved work rates. It’s also fitted with a larger FL4121 front loader which provides slightly more reach. I wouldn’t hesitate to choose the same again.” 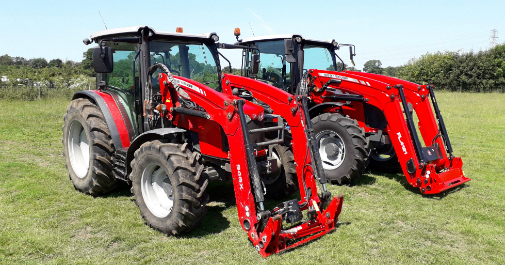 Heath Farm’s Massey Ferguson 95hp 4709 (left) was replaced by the larger 95hp 5710. For loader work the smaller tractor required rear wheel ballast, but no extra weight is needed for the 5710.

Mike was keen to fix his costs of ownership and took out a five-year service contract and an extended manufacturer warranty for the same period. “We don’t want unplanned expenses, so it’s reassuring to know that apart from fuel, and wear and tear we know what this tractor will cost us every month.” By late September the 5710 had already worked more than 350 hours during which it proved completely reliable, and Mike said there are only two minor issues for the dealer to rectify. “Neither is urgent, and I’m confident that when the TNS engineers come to service the tractor they will be easily fixed.”

Mike has been so pleased with his two Global-Series tractors and the back-up from TNS that he has also recently purchased a new Massey Ferguson DM306P mower, a TD776DN tedder and an RK451 rake, all replacing other brands. These were used behind the 5710 this season and, as well as improving work rates, they helped achieve cleaner, better forage. Mike likes his Welger baler and he commented that as Massey Ferguson’s latest balers are based on the proven Welger design he will definitely consider one in future. 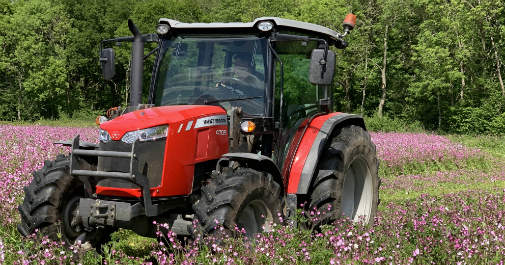 “The Massey Ferguson 5710 offers all the same benefits as the 4709, but it’s more capable,” Mike concluded. “Not many manufacturers offer simple, practical tractors with such a modern, user-friendly design but for a business like Heath Farm Suffolk, the Global-Series is exactly what’s needed.”