Testimonials
26th January 2021
MF BALER-WRAPPER IS MORE THAN UP TO THE TASK
“We have been so impressed by the new baler-wrapper and the service from the dealer, that we feel confident now to look at other Massey Ferguson grass harvesting products when our current machines are due for updating.”

When it comes to baling forage, the Welger brand’s reputation is a hard act to follow, but Cornish contractor Kevin Heywood, says his latest Massey Ferguson baler-wrapper is more than up to the task.

Welger round balers have been used by the Heywood family since the 1970’s when Alan Heywood relied on them to harvest hay, forage and straw for his dairy herd. In 1979 Alan started a round baling contracting service, and in the mid-1980’s he gave up the dairy cattle to focus on the contracting enterprise which is now run by his son Kevin. Trading as AJ Heywood & Sons and based near Bude, the family business specialises in forage harvesting, straw baling and groundworks and serves farmers within 20-miles radius of its base.

This year, more than 20,000 hay, haylage, silage and straw bales will be made by the Heywoods’ four round balers. A large square baler is also used - mainly for straw bales, and 3,600ha of mainly grass forage will be harvested by two modern self-propelled forage harvesters, along with 120ha each of wholecrop and maize for dairy and beef farms in the area.

“We have always had at least one Welger baler within our fleet,” explained Kevin. “We bought our first Welger RP125 because it was offered by the dealer which supplied our tractors at that time, and then over the years we saw the build quality and performance improve with every new model as we updated them. Other makes were also purchased when there was a particular reason, such as if Welger didn’t have an equivalent model within its range, but this just highlighted that other brands were generally less reliable and made bales which were less consistent, so we stuck with Welger wherever possible.”

First Welger baler-wrapper Nearly all the round bales are wrapped and three seasons ago the first Welger Tornado baler-wrapper combination to arrive in the UK joined the Heywood fleet. “We’d been asking for a Welger baler-wrapper for years, and because there wasn’t one in the range it meant using another brand,” said Kevin. “It was frustrating knowing the machine was in development but not having access to it, but Welger has a history of not releasing machines until they are right, which is partly why it’s so successful.”

Since it arrived, the Tornado has made and wrapped up to 11,000 bales per season for the past three years. It now works along-side two Welger 245 balers and a new Massey Ferguson 3130F Protec baler-wrapper combination which arrived this April. “We hadn’t used Massey Ferguson products in the past or had much to do with Alan Snow our local dealer, so when we heard that Agco had taken over the Lely Welger forage machinery division we were a little concerned,” commented Kevin. “We needed a second baler-wrapper combination as our separate wrapper was working almost 24 hours a day to keep up with our three Welger balers. We were relieved to see that rather than start designing a new baler from scratch, Massey Ferguson had based its new models on the successful Welger machines, and all the changes to the product represented genuine improvements.” 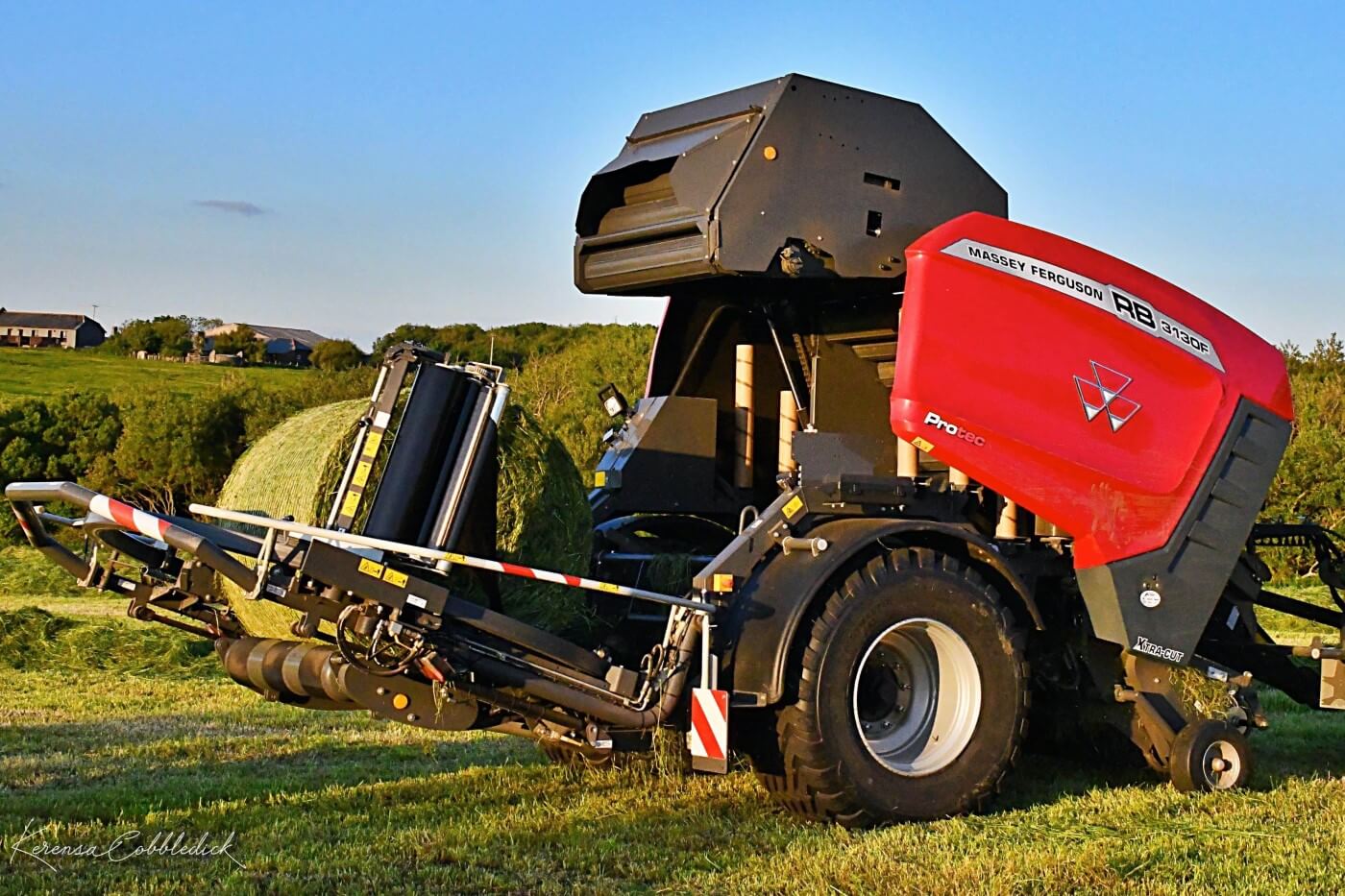 The new Massey Ferguson RB 3130F Protec was put to work at the start of this season and Kevin commented that it is proving to be even better than the Welger Tornado. Improvements include better transfer of the bales to the wrapper, even on steep slopes, as the bale chamber is lower than before. Performance is also better when working across steep slopes as the wrapper functions equally well when travelling in either direction whereas bales could twist as wrapping started on the Tornado’s wrapper, if the ‘wrong’ side faced uphill.
The new styling is more streamlined with a lower overall height and is preferred by users as it allows an improved view over the baler to bales on the wrapper. The free-wheel drive clutch reduces stress on the tractor, and the updated control box is preferred as it allows users to adjust more baler settings from the cab. Transport is easier too, due to a folding system which keeps the wrapper table compact and low.

Confidence in dealer and brand

Kevin admits that before investing in the latest Massey Ferguson baler he considered other brands, although he didn’t get as far as obtaining prices. “We have a reputation for producing good, consistent bales to maintain, and when we found out that under the Massey Ferguson badge the design was still mainly Welger we were reassured,” he said. “If it had been a completely new machine then we would have been more cautious, but we have no doubts that the new Massey Ferguson baler-wrapper and the Welger Tornado will easily produce and wrap the 8,000 bales each we require each season. “We have been so impressed by the new baler-wrapper and the service from the dealer that we feel confident now to look at other Massey Ferguson grass harvesting products when our current machines are due for updating.”

The Alan Snow Area Sales Manager for East Cornwall and West Devon is Alan Lake, who looks after the Heywood’s account. “It’s always good to have a new product to offer customers, so having the Welger-based Massey Ferguson balers was a real bonus,” he explained. “I’m from a farming family and we use Welger at home, so I knew there is nothing to touch it for reliability and performance. As soon as I heard we would have the Welger-based balers to offer I went straight in to see Kevin Heywood because I knew that the range would suit his professional business. “We have seen a big increase in the number of enquiries for our balers from farmers and contractors currently using competitor proucts and these seem to be divided between those who are keen to buy a Massey Ferguson-badged round baler, and others who are attracted by the Welger design under the covers. Whatever the reason, it’s great to have another string to our bow within a product line-up we can confidently offer to new and existing customers.”