Testimonials
3rd February 2021
MF 8S - A LASTING FIRST IMPRESSION
The new tractor was delivered in mid-January and immediately impressed the family. “The standard of finish is excellent and visibility from the new cab is superb,” confirmed Richard. “It’s got a great specification too, and is quite a step up from what we had before.”

One of the first Massey Ferguson MF 8S series tractors to be delivered in the UK quickly impressed its new owners on a Bedfordshire mixed farm.

The farming business is run by Margaret and Iain Rook and their sons Edward, Richard and Alistair. Operating as a partnership between J Sharp & Son and FG Rook & Son, the business consists of two farms near Biggleswade with different cropping and rotations on each. One is predominantly cereals plus potatoes, and grass for a herd of Angus beef cattle and sheep, and the other is mainly vegetables, onions, beetroot, sugar beet and coriander. The sheep are managed by Edward Rook who is also building up a farm contracting business as a separate enterprise to the family farm.

Trust in the brand

The MF 8S.205 replaced a Massey Ferguson 6485, and joins eight other tractors of the same brand on the fleet. “We changed from Allis Chalmers to Massey Ferguson in the late 1950s, and still have a Massey Ferguson 35 that was bought new in July 1960,” explained Iain Rook. “It joined other Fergusons that were already on the farm, and since then we have owned models from almost every series having remained loyal to the brand and local dealers. We have always enjoyed good reliability, and currently have a 675 displaying 3,500 working hours, but which has previously been around the clock, and we know the hour meter hasn’t worked for the past 20 years. We also have two 3085 tractors, both of which have worked more than 16,000 hours without major problems. We have had a number of local dealers over the years but the back-up has always been excellent, including helpful parts teams which we consider essential.”

Before the new tractor was ordered, options considered included other brands. A list of potential candidates was reduced to three which appeared promising, and these were put through their paces during on-farm demonstrations. “They all performed well but our favourite was a Massey Ferguson 7700S-series, loaned by our local main dealer Chandlers (Farm Equipment) Ltd. We were going to purchase it, but then started looking into the new MF 8S-series tractors and were very impressed by the new design and specification. So we ordered an MF 8S.205 instead, without seeing or trying it,” said Iain.

The model ordered by the Rook family was the base MF 8S.205 with a Dyna-7 transmission and top Exclusive specification. “We have several tractors already with Dyna-4 and Dyna-6 transmissions and get on very well with them, so expect the Dyna-7 with its extra gear to offer greater flexibility and efficiency,” explained Richard Rook. “It’s our first tractor with RTX guidance and auto-steer, and we believe this will offer benefits including improved working accuracy and greater productivity.”

The new tractor was delivered in mid-January and immediately impressed the family. “The standard of finish is excellent and visibility from the new cab is superb,” confirmed Richard. “It’s got a great specification too, and is quite a step up from what we had before.”

As the farm’s main tractor, the new MF 8S.205 will do most of the heavier field work including cultivations, and bed-forming and ridging for potatoes. It will also pull the farm’s 3,000-litre, 24m trailed sprayer.

Chandlers Massey Ferguson brand manager for the northern area, Andrew Sherriff said that the new MF 8S tractors are creating a lot of interest. “The Rook family was first to order and receive their new tractor, but we also sold another two before Christmas, then three more by mid-January. It’s an exciting time for Massey Ferguson dealers as this is a tractor we have all been waiting for. We will run demonstration models of all sizes and look forward to the fields drying out and spring field work starting so that we can get them on to farms for potential customers to try. It’s created quite a stir,” he added.

Chandlers area sales representative, Simon Smith looks after the Rooks’ account and said he believes the MF 8S.205 with its Exclusive specification will suit the family well. “The previous 7700S-series was very good, but the new models feature improvements in all areas from lower cab noise levels for improved operator comfort to the built-in GPS hardware for added performance and security. It’s an attractive new design too, and everyone who has seen it has commented on the appearance and quality of finish.”

“We are very pleased with our decision to purchase the latest Massey Ferguson,” concluded Margaret. “If the competitor brands had offered significant advantages in terms of performance or price then we might have been tempted, but we preferred the previous model Massey Ferguson to the other tractors we tried, and the new MF 8S seems even better.

“Back-up from the supplying dealer is just as important as the tractor itself, and we know that between the manufacturer and the Chandlers team we will be well looked after.” 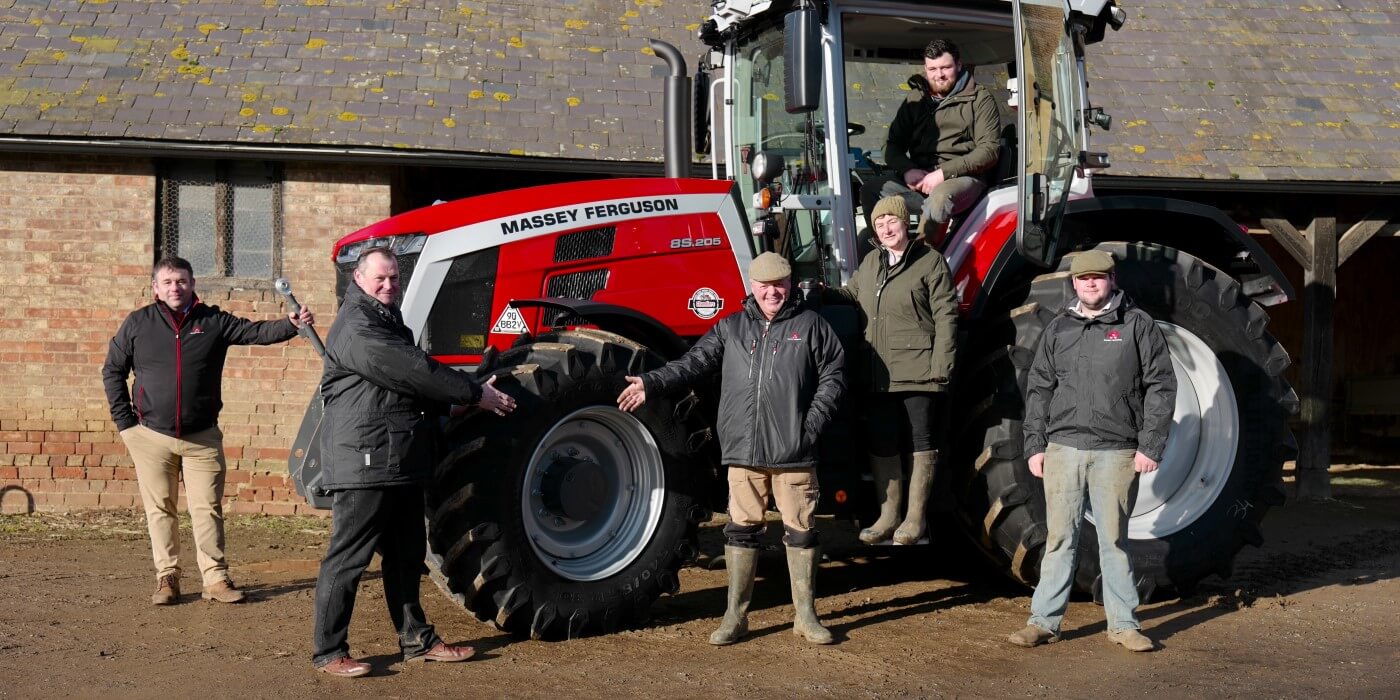 Click here to find out more about the MF 8S