Testimonials
15th July 2021
Confidence in MF combines for Norfolk family business
A Norfolk farming family which replaced a competitor brand combine with a Massey Ferguson last year says it has much more confidence in the new machine’s reliability and performance.

The family are tenants of Blickling Estate and soils are mainly sandy loams, although there is also some heavier contract-farmed land which helps spread the seasonal workload. Some general farm contracting is also carried out for local farmers.

Massey Ferguson tractors have been used since the 1970s, and the current fleet includes an MF 7720 S Dyna-6 and a MF 7718 Dyna-VT. Massey Ferguson combines were also used in the past, but more recently a succession of machines of another brand were chosen. The latest of these had reliability issues and it proved difficult to obtain an acceptable crop sample so, in 2019, demonstrations of two potential replacements took place on the farm, one of which was a Massey Ferguson Beta 7370.

“We have a superb relationship with Thurlow Nunn Standen – our local Massey Ferguson dealer and regard members of the sales and service teams as friends,” explained John Gay who farms with his sons Tom - who works full-time on the farm, and George who is employed on a farm locally but also helps out on the family farm during busy periods. “The back-up is always exceptional so when we decided that a change of combine brand was needed, we had no hesitation considering the Massey Ferguson.”

Malting barley is grown under contract for Budweiser, so care is taken to protect the grain from damage and minimise losses. Wheat is mainly for feed. “We tend to regard our cropping as high input/high output, and expect good yields and quality,” continued John. “We don’t have a dryer, so being able to make the most of suitable weather windows when the crops are at optimum ripeness is a priority.”

A Massey Ferguson Beta 7370 6-walker 360hp combine with a 6.8m PowerFlow header was demonstrated by Thurlow Nunn’s experienced operator, Ben Hockley. “We were very impressed by the combine and the attitude of the demonstration team,” explained Tom. “Conditions were tricky as the wheat crop was laid and quite wet on the headlands, but the PowerFlow header lifted it gently and maintained an even feed. Losses were minimal and it achieved a good sample and away from the headland where the crop was standing and drier, the work rate was impressive.

“The Beta 7370 achieved a better result and much lower losses than the other combine we tried, and the price was more attractive too, so we placed an order with our Thurlow Nunn Standen area sales representative Paul Defew.”

The new combine arrived in time for the 2020 harvest. Dealer back-up was excellent from the start, including assistance from the Thurlow Nunn team optimising performance on the first day of work. Throughout harvest the combine proved reliable with only a few teething issues which were expected. These all occurred within the first 20 working hours and were quickly rectified.

The PowerFlow header performed well in all crops, but particularly impressed in oilseed rape. “We specified an optional rape auger, and it was easy to see from the cab how much better the crop flowed across the table,” explained Tom. “Because it was so even I could keep the combine full for an optimum threshing and cleaning result without worrying that the combine would block. Our previous combine had an adjustable header which could be extended for oilseed rape, but there was a tendency for it to build up and then enter the combine in bunches. We usually experienced at least one blockage each season.”

The Massey Ferguson header also made it much easier to switch between crops. For large areas of oilseed rape the side knife was fitted and the table auger height was adjusted, which took approximately 15 minutes. For smaller areas when there was frequent switching between crops as they ripened, the side knife was fitted which took just a few minutes, and the auger was left in its standard position where it still performed well. This contrasted with more than an hour required to prepare the previous combine each time - including fitting the side knife and removing and re-fitting the table floor plates. 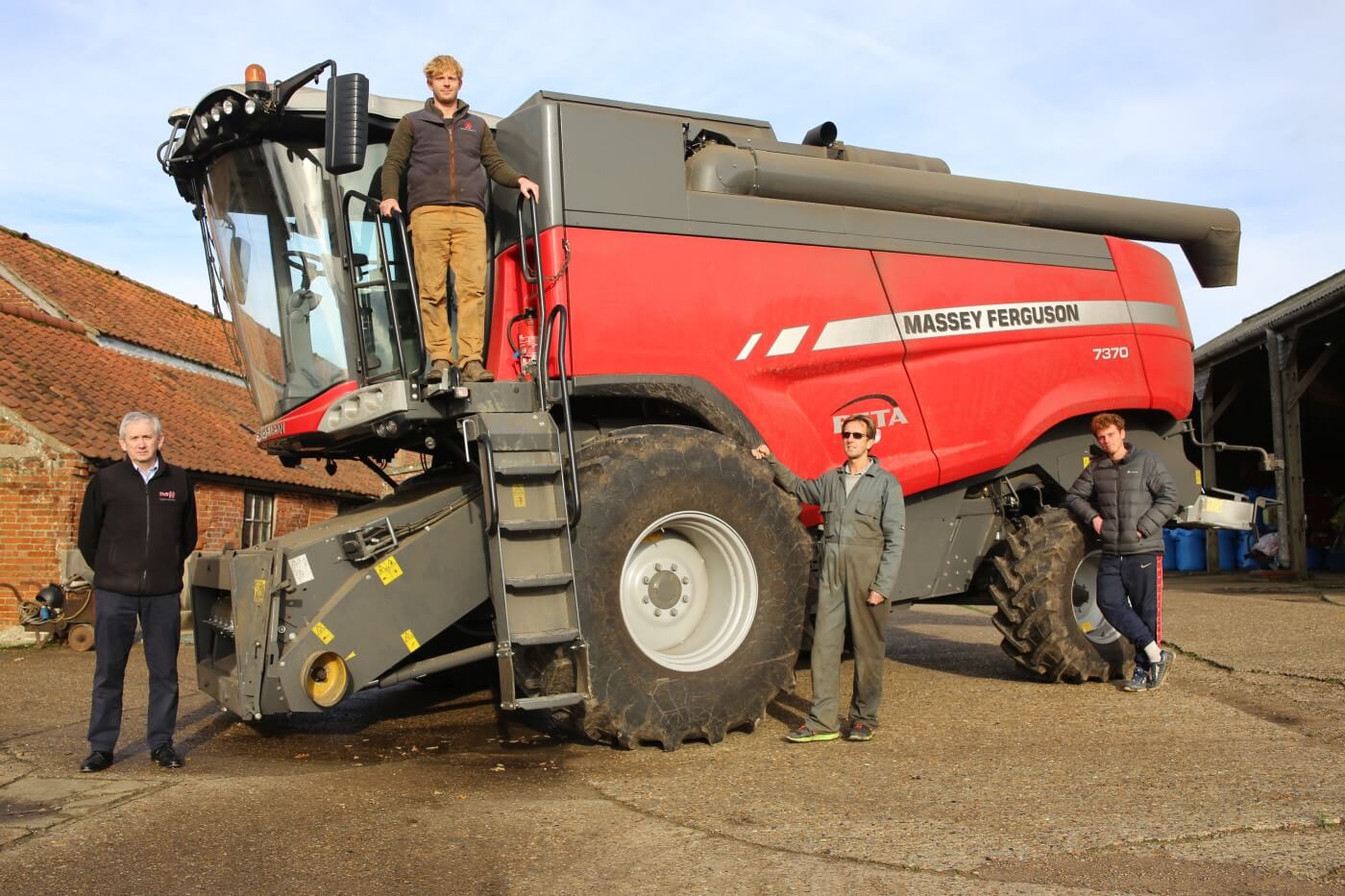 Tom commented that setting up for different crops is straightforward and the TechTouch terminal makes it easy to optimise harvesting performance from the cab. “One of the biggest problems with our previous combine was that we sometimes had samples containing both damaged grains and unthreshed heads, and it was impossible to achieve the result we wanted. There were occasions when our malting barley was rejected due to cracked and damaged grains, so it had to be sold for feed instead at £10 less per tonne, equivalent to approximately £75/ha. We are confident that we won’t experience similar issues with the Massey Ferguson, and we can make fine adjustments from the cab to maintain an excellent sample as working conditions alter. I’m particularly impressed by the concave adjustment which allows the front and rear gap to be set independently to achieve just the right amount of separation. When tougher threshing is needed the crop can be kept tight against the drum for longer, but when it separates more easily then the amount of contact with the drum and concave can be reduced which minimises grain damage, improves throughput and saves fuel.”

Asked whether the new combine’s better performance might provide opportunities to extend the working day starting earlier and finishing later, John said that in theory it would. However, one of the main reasons for upgrading to the new machine was to gain extra capacity to allow working only when conditions are optimal, but still complete harvest on time.

A small amount of straw is exchanged for manure from a local farm, but all the rest is chopped. The farm is only a few miles from the north Norfolk coast so there is often a strong breeze which can affect the chopper’s spread pattern. The new combine is equipped with adjustable spread vanes which can be used to compensate, and Tom commented that these were effective and easy to adjust.

Tom said the Skyline cab is quiet and comfortable. The controls are well laid out and he especially likes the PowerGrip multi-function control joystick. Visibility is excellent across the header, and also back along the sides of the combine which is essential when moving between work areas as most of the travelling is along narrow lanes.

On the road the combine travels well, but Tom said the extra width of the 6-walker combine over the previous 5-walker machine means it requires constant vigilance.

The combine recorded 165 hours during the 2020 harvest, and proved economical and easy to look after. Although fuel consumption isn’t precisely monitored and crops were generally thinner than in an average year, Tom said he was impressed by how little diesel was used. Maintenance is minimal – only the straw chopper requires daily greasing and the engine bay and filters remained almost dust free. “I did check and clean the engine bay during harvest although it wasn’t actually needed,” he explained. “On our previous combine the dust build-up was so rapid that we had to clean it daily or a fire would have been likely. The Massey Ferguson is much easier to look after.” 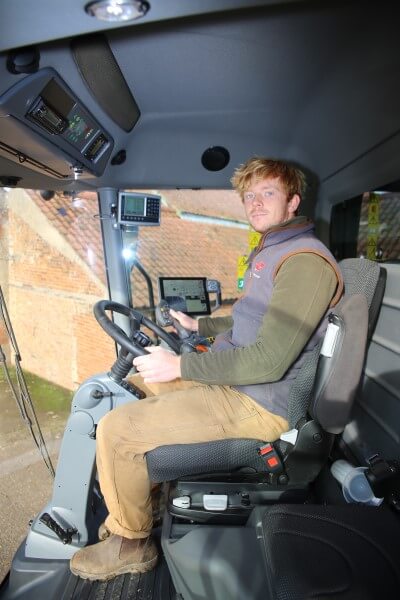 Tom Gay is the combine’s main operator and he said main advantages over the previous combine include extra power, an improved grain sample and the PowerFlow header which copes easily harvesting all crops in a wide variety of conditions.

The farm’s tractors are kept for four years and updated alternately so that one is replaced every two years. The combine was purchased with a five-year extended manufacturer’s warranty, with servicing by the dealer carried out annually. The current plan is to keep the combine for at least five years, and then updating it will depend on farm finances, cropping, and the area farmed.

“We are keen to take on extra land nearby when there is an opportunity,” concluded John. “We don’t regard combine performance as all about the work rate, although we would estimate that the new combine will easily achieve 10–15 per cent more than our previous machine. To us, the priority is achieving a good, clean sample and making sure that as much as possible ends up in the trailer. Our previous combine struggled to cope with the current level of cropping, but we have invested in a larger combine with extra power and capacity and an extremely capable header which means we could comfortably do a lot more in future. We have great confidence in the new machine’s reliability, and if problems occur then we know we can rely on the back-up from Thurlow Nunn Standen.”