Testimonials
11th January 2022
Family farm relies on MF fleet to get the work done
A busy dairy and beef farm in County Antrim, Northern Ireland, relies on a modern fleet of Massey Ferguson tractors to carry out the jobs associated with managing livestock.

Shunning the use of agricultural contractors for most of their work, the Ferguson family, who run Seskin Farm outside the village of Straid, prefer to carry out their own operations.

Seskin Farm is home to 350 dairy cows and is run by John and Miriam Ferguson together with their two sons, Allen and John, and their families. While everyone mucks in, John mostly looks after the young stock while Allen and his Dad milk the cows.

“We milk around 350 cows in the family partnership, farming a total of 550 acres including conacre,” said Allen. “My father and I mostly carry out the milking while my brother John looks after the calf rearing and the Artificial Inseminations of the cows. I also look after all the machinery in the business.

Managing a herd that size requires a reliable fleet of tractors to carry out the main jobs on the farm and that reliance has traditionally been on the Massey Ferguson brand.

“The only jobs we don’t do here is ploughing or spreading slurry with the umbilical system,” said Allen. “We leave that to the contractor but everything else we manage.

“Massey Ferguson has predominantly been the brand of choice here and currently we run a total of seven MF tractors dating back to the smallest and oldest MF 165 scraper tractor. 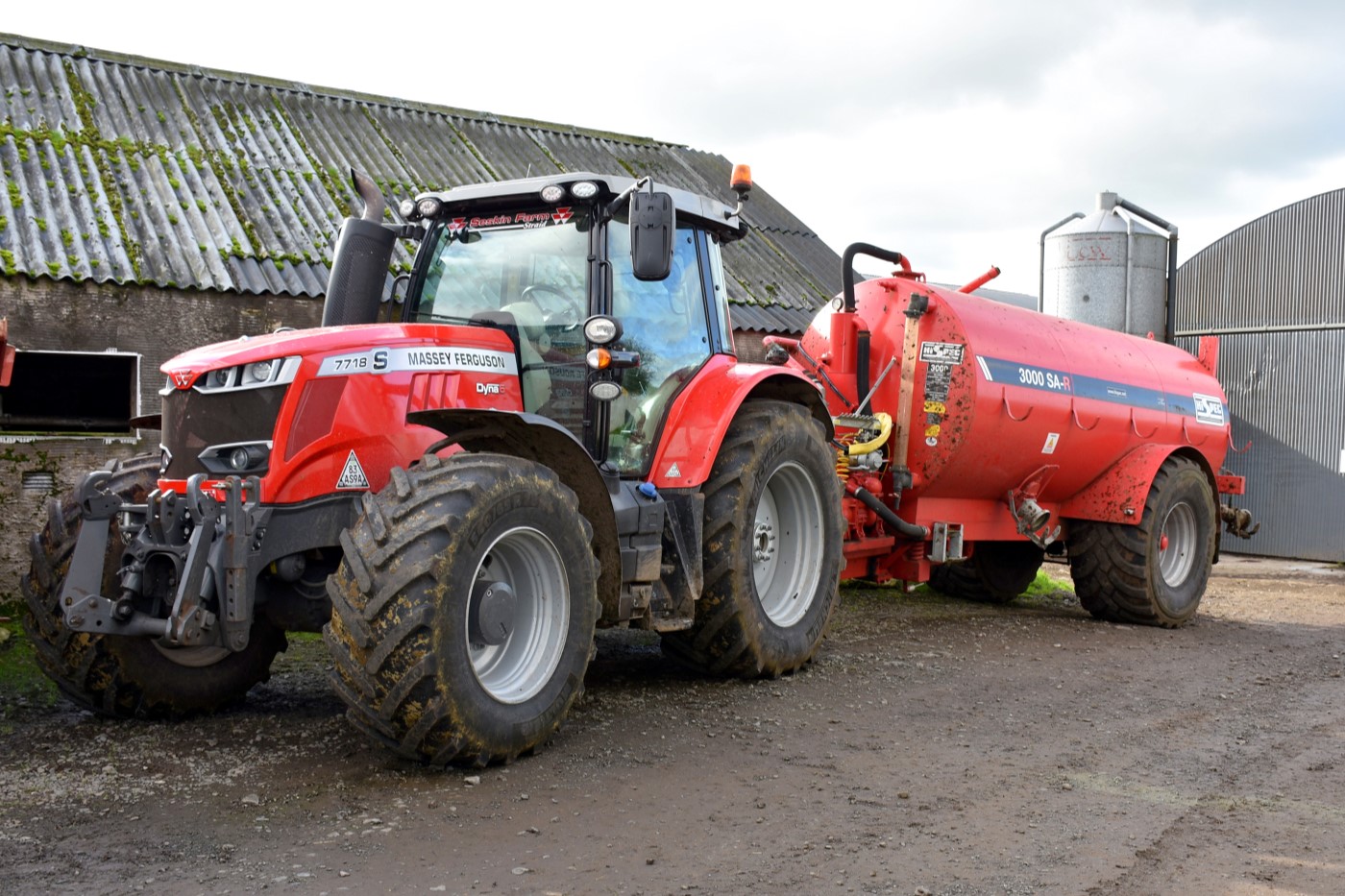 Hauling silage and slurry are the most common jobs demanded from the bigger MF tractors on the Ferguson farm, making power, braking and operator comfort the purchase influencers when buying a tractor.

“We have been very impressed with the new tractors this year, particularly the MF 6715S,” said Allen. “It seems to have plenty of power when required and is very manoeuvrable with a compact turning circle. The MF 6718S is slightly bigger with a bit more power under the hood, but there is very little difference between the two. All these tractors have the Dyna 6 transmissions which I like. It never gives us any trouble on the tractors.”

Allen says they don’t really have a regular policy when it comes to buying new tractors, but also said he wouldn’t bypass a good deal if one was on the table.

“We don’t stick to a regular policy when it comes to changing tractors to new models,” he said. “We maintain all the tractors well and really look after them. Tractors are only changed when they really need to be, or when the local MF dealership gives us a deal we can’t refuse!

“We used to buy second hand tractors, and still would, but the last three tractors we have purchased have all been brand new because we were getting a good deal on them.

“The warranty on a new tractor is very important to us and is another reason we like buying new. It costs a lot of money to repair something that is out of warranty. We have tractors covered by four years warranty which gives us good peace of mind. For us, when buying a tractor it must have a minimum of two years warranty otherwise it’s not a good deal. 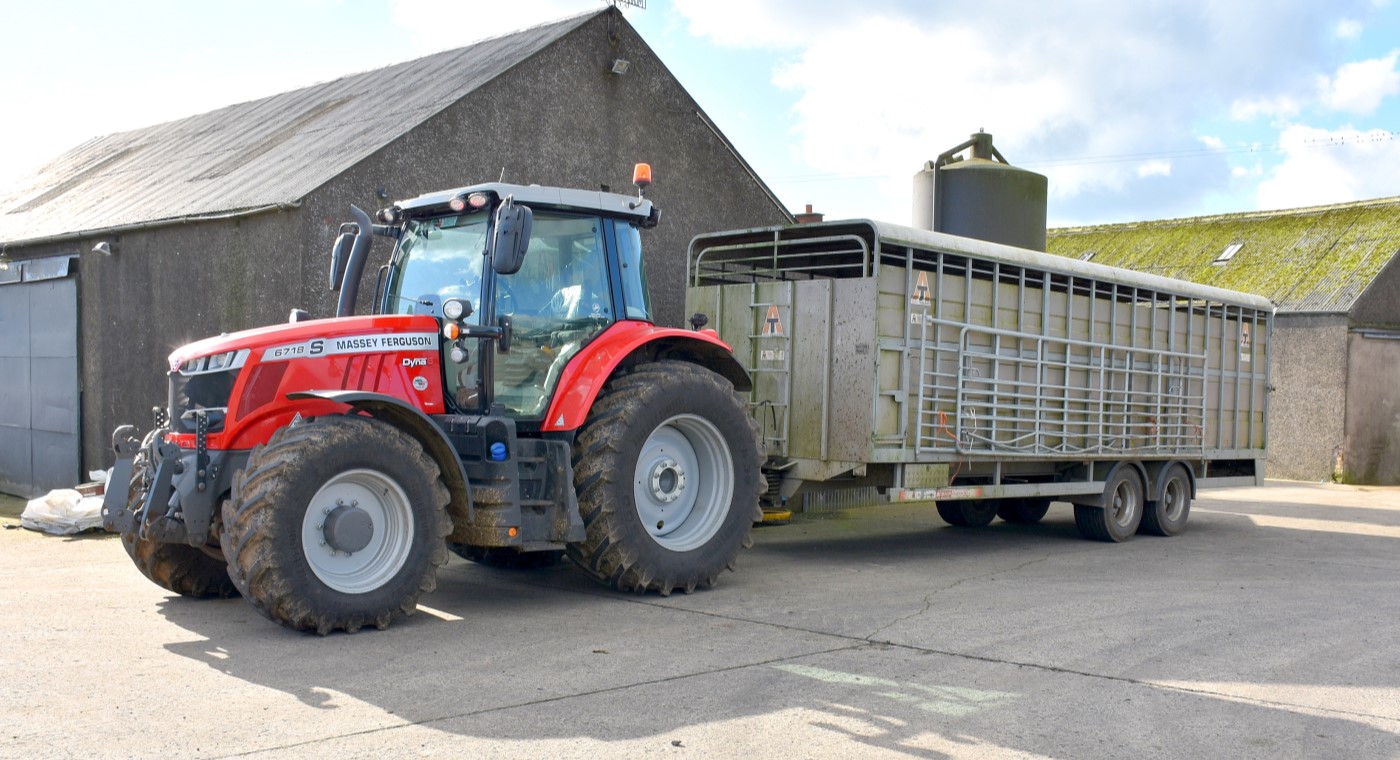 “We service the older tractors not covered by a warranty here ourselves and the dealership services the newer tractors. The newer tractors have come on Trelleborg tyres which seems to have more wear in them and are a good tyre,” Allen said.

Kevin Gribben, the MF sales manager with the local dealership, John McElderry M&T Ltd, said: “The Ferguson family are loyal Massey Ferguson customers and truly understand their specific needs for power and technology. There are advantages to the customer with good Massey Ferguson warranties when buying new, just to give that extra peace of mind. The two new models Allen bought this year replaced two older models and keeps the bigger tractors in the fleet more modern to hold a good residual value.

“For sure I will keep in contact with Allen to monitor how the new tractors are performing. We really appreciate the loyalty and repeat business and we will endeavour to make sure this is rewarded with the best deals possible backed up with excellent after sales support.”