Hay producers know management decisions made in the fall can impact stand persistence and regrowth the following season. However, with severe drought affecting many North American farms and ranches, the need for forage this season might outweigh the risks of late season cutting. This isn’t a decision to be made lightly, though. Poor harvest management this fall could result in winterkill, winter injury, late emergence in the spring and decreased overall stand longevity.

There might still be time for one last alfalfa harvest, but before you fire up the disc mower or self-propelled windrower, take these five factors into consideration.

Stand age is an important factor for assessing winter injury risks. Older stands, those over 3 years, are more likely to winterkill.

Depending on variety, alfalfa can tolerate temperatures from 5 to 15 degrees Fahrenheit. At colder temperatures, the water in plant cells turns to damaging ice. Winters with little snow cover also increase winter injury chances, even when temperatures aren’t bitterly cold, since snow acts as an insulator. Prolonged periods of ice can also lead to winterkill. Ice sheets prevent air exchange to the alfalfa crown, resulting in a build up of toxic metabolites. And when spring finally arrives, heaving becomes a concern. This is most likely in heavy soils with high moisture content but can occur anywhere conditions are right. The soil expands and contracts as the temperature fluctuates between freezing and thawing, damaging tap roots.

Improved genetics can minimize winter injury risk. When selecting an alfalfa variety, consider those with high disease resistance and good winter hardiness for better stand persistence. Winterhardiness maps and fall dormancy numbers, can provide some guidance, but working with your extension agent or agronomist will often provide the most localized information. 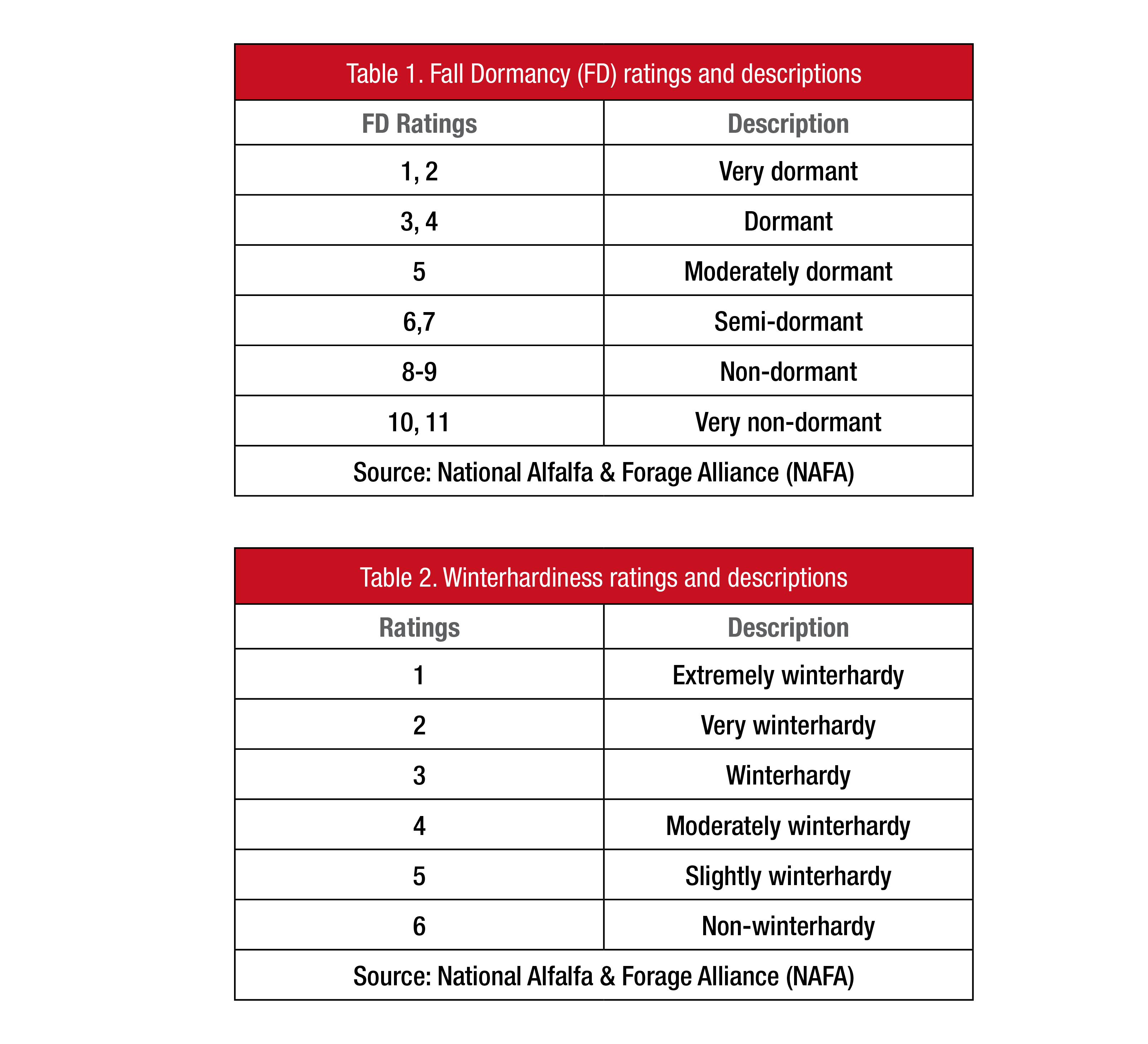 A final note on stand age and fall harvest management: During the establishment year, alfalfa plants need to store more energy to persist through winter. If the decision is made to take a second cutting during this initial season, work should be done early enough for the plant to rebuild energy reserves before winter or delayed until after the first killing frost. We will dive deeper in the last cutting date a little later in this article.

Cutting frequency during the haying season has a direct effect on winter hardiness. Alfalfa survives winter on carbohydrate reserves stored during summer and fall. When alfalfa reaches 6-8 inches in height it starts replacing carbohydrates in the root, a process repeated after each cutting. 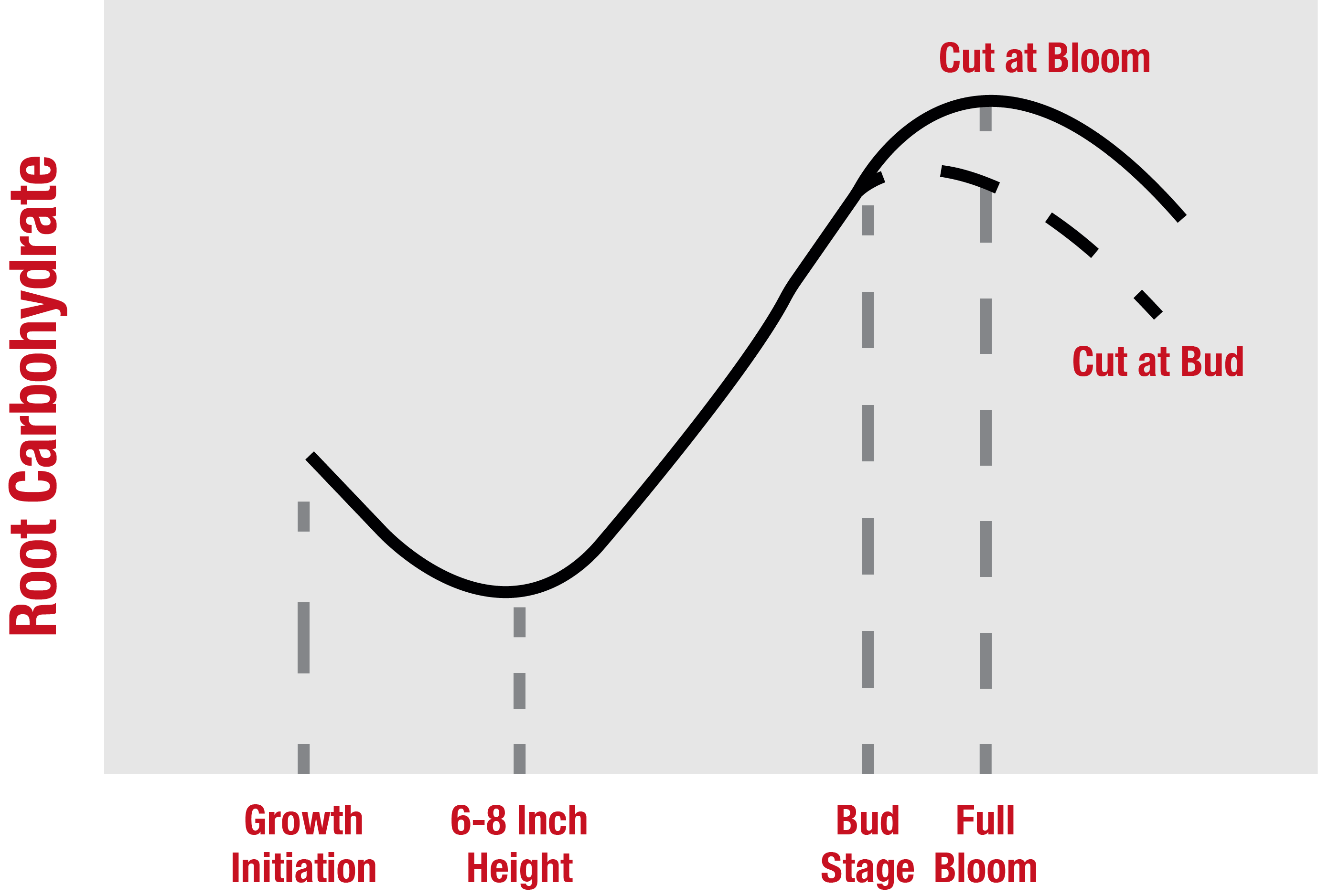 Alfalfa cannot reach its full energy reserve during the growing season with a cutting frequency of 35 days or less. By the end of the growing season, plants need a high balance of reserves, 30 to 35% of the dry root weight, to minimize the risk of winter injury. Allowing a 45-day rest period between late summer and fall harvest gives alfalfa stands time to replenish root reserves before winter hits.

Figure 3. This figure shows the levels of carbohydrates reserve (energy) in the form of starch stored in the taproots of alfalfa plants harvested three times during the growing season.

Potassium is an important nutrient for building carbohydrate reserves in alfalfa. Maintain high potassium levels during late summer and early fall since this is when plants need to build reserves for winter. A K application after the last harvest can help with winter survival of alfalfa. Potassium applications after plants are dormant does not benefit winter carbohydrate storage.

Moisture and soil pH are additional health factors to keep in mind when assessing stand persistence. Soil pH above 6.6 can reduce risk of winter injury. Additionally, well-drained soil is better for alfalfa plants throughout the growing season and especially for fall harvested stands.

This is probably the most familiar consideration. Traditionally, producers have been told avoid cutting between September 1 and mid-October. However, many hay producers are finding they can tweak the traditional last cutting window to fit their region. Using growing degree dates (GDD), rather than an actual calendar, hay producers can calculate their unique fall harvesting window. A number of useful online tools exist to help with the math. Look for resources from local extension programs and universities, trusted agricultural providers or regional publications.

According to research coming from the Canadian Journal of Plant Science, alfalfa needs 500 GDD between a late season cut and a killing frost. Based on this information, the last cutting date recommendation for a particular region could be well into September. For no-regrowth harvesting, hay producers need less than 200 GDD to minimize winter injury, according to Dan Undersander, former University of Wisconsin extension forage specialist. Using this calculation method, the span between more than 200 GDD and less than 500 GDD would be considered a no-cut window.

There is still an amount of guesswork included with GDD calculations, so this isn’t a sure-fire solution. As we all know, the weather is anything but predictable. Growers take the risk of accumulating too many or not enough GDD.

If, all things considered, a fall alfalfa harvest looks feasible, be sure to raise the cutter bar height for your final pass. During the growing season, alfalfa can withstand 2-3 inch cutting heights and still have proper regrowth. For last harvest, though, setting the cutter bar at a 4-to-6-inch height is recommended. The remaining stubble helps catch snow and can have a mulching effect, protecting crowns over winter.

Finish Fall on a High Note

Fall harvest always involves a degree of risk. But, at the same time, so does any management decision. Thoroughly considering your unique situation and taking the proper precautions will provide the best opportunity for alfalfa during the cold winter months.

A final note for hay producers taking this calculated risk: With late season harvesting, there may not be time or weather for a proper dry down. You’ve got two options – employ tools to increase dry down or cut for silage.

As we’ve discussed in a prior blog on baling best practices, if you are looking to bale dry hay, the ideal moisture content is 14-16% for small square bales and most round bales. Large square bales should be around 12%. With shorter days and less warmth, fall harvest would definitely be a time to employ mower conditioners to speed up dry down. The Hesston by Massey Ferguson® 9300 Series RazorBar™ rotary disc headers for WR9900 self-propelled windrowers have an option for a TwinMax double conditioner, which crimps the forage every 1.5-2 inches instead of every 3-4 inches with a single conditioner. Our research has shown a reduction in dry down time by nearly a day compared to unconditioned hay and the ability to bale 6 hours sooner with double vs single conditioned alfalfa without any reduction in forage quality. Also, keep in mind that last cutting hay often provides less tonnage, making an efficient baler all the more important.

In many cases, the need for additional steps to reach proper moisture make silage much more cost-effective. There’s more information in our previous blog about the benefits of silage, but suffice it to say silage helps producers better manage harvest windows and overall quality. Optimal moisture for silage is 45 to 60%, and wrapping bales within 24 hours has shown to produce the best feeding value.

Versatile equipment like the Massey Ferguson RB V Protec can offer hay producers the best of both worlds, allowing you to choose dry bales or silage depending on your unique needs. Talk to your Massey Ferguson dealer today to discuss this or other hay tools to help you maximize fall harvest management.